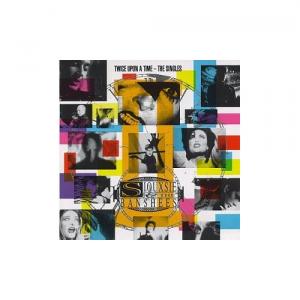 "Face to Face" by Siouxsie and the Banshees

There was a lot to forget about Batman Returns, although in the pantheon of revived Batman movies, Batman Returns is probably the second best (this doesn't, of course, count the recent Batman Begins). There was just something too Tim Burton-y about having to watch Danny DeVito waddle around as the Penguin, but it was made up for a little with Michelle Pfeiffer and that Catwoman outfit. Otherwise, it was bizarre, bogged down, and kind of uncomfortable to watch. One thing that is usually forgotten, though, is the distinct change in the music, both from the first film and the subsequent Joel Schumacher disasters.

Unlike the Batman helmed by Burton where Prince was allowed to run amok for the soundtrack, Batman Returns was scored by Danny Elfman and only one "pop" song was spawned, that being the collaboration between Elfman and Siouxsie and the Banshees, "Face to Face." It's a wholly remarkable song with the sort of dark, orchestral flourish that both compliments Danny Elfman as a composer and Siouxsie and the Banshees as a goth-rock band. Of course, it helped that I had a crush on Siouxsie Sioux, so hearing her literally purr on the song was absolutely, undeniable hot (and Siouxsie as Catwoman in the video helped too), but as with most things that are, well, great, radio completely ignored the song. Sure, every other Batman movie of the era spawned multiple hits – who can forget masters like "Batdance, "Hold Me, Thrill Me, Kiss Me, Kill Me" and "Kiss from a Rose"? No one, and we're all still in pain about that, but one of the few great songs from the series gets relegated to the discount used bins (well, I suppose the soundtracks to the other films are there too, keeping each other company until eternity). However, every time it comes up, I am struck with the timelessness of the song, something most songs on the Batman soundtracks can't claim. It is a perfect blend of modern rock and cinematic scoring that just ended up being ignored by pretty much everyone.