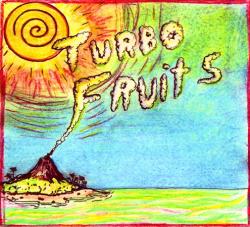 The Turbo Fruits – an offshoot of Nashville’s Be Your Own Pet – play the breed of rock 'n roll that’s best paired with a pint of sudsy and a strong buzz. Lyrically and musically, there’s not a lot of substance – but in the right venue, with the right pairing of mind-altering substances, I’m sure someone thinks this is the stuff of genius. Unfortunately, that someone just isn’t me.

I’m finding this record – barely 30 minutes long, which says something – tough to get through. In doses it’s ok. The Turbo Fruits’ energy, apparent in rockers like “Murder” and the blues-rock, back-to-back tracks “Know Too Much” and “The Run Around," is fun and catchy. But the redundancy over 15 tracks gets old. And it just like I feel like I’ve heard it before, in many a basement of many a house-show, with many an ass clown moshing around, shirts off, spilling beer on everyone in sight.

Turbo Fruits employ repetitive, base-humor lyrics, moshy guitar licks, and thrashing, cymbal-laden drums, infused with both a bluesy-rock and thrash-core vibe. And a lot of sweat. Think stoner swagger mixed with glammy 70s rock, which melds into a surprisingly fast-paced, raucous result. But none of the material on this Ecstatic Peace debut sounds polished, or even rehearsed. It sounds like the trio — guitarist Jonas Stein, drummer John Eatherly (perhaps riding on the coattails of their acclaimed Be Your Own Pet), and bassist Max Peebles (aka “Turbo Max”) — showed up at their practice space, hit ‘record’ on the machines, and let ‘er rip.

It’s one thing to be unpolished; hell, where would most punk be without the grit and grime of a whiskey-bitten throat, a PBR-fueled guitar lick, and hangover-powered sloppiness? But there’s no sense of any pre-conceived tracks on any of the 15 songs on this album. Despite the musical shenanigans (Excerpt: 40 seconds straight of the word “Volcano” concludes the song titled, well, “Volcano”), the trio somehow landed gigs at both the Reading and Leeds festivals. It pains me to wonder which bands didn’t get a spot on those coveted lineups instead of these guys. The Turbo Fruits are also scheduled for a handful of other club shows, so far only in the London and New York areas.