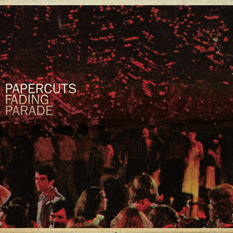 This is probably an oversimplification, but it often seems that some bands are merely a great idea, and some bands are full of great ideas. Ideas are great, but they shouldn’t be half-drawn caricatures simplified in order to sell, sell, sell. San Francisco’s Papercuts is a band (the band being Jason Robert Quever and whoever and whatever he’s playing with) with a lot of great ideas going on, echoing Moogs, the mnemonically unsettling Mellotron, shivering guitars, tape chopping, and apparitional (yet somehow apple-cheeked) vocals. Its pouty prettiness sure sells to me, but it doesn’t appear to my ears anywhere near crypto-Warholian sold-out.

Having toured with Beach House, Grizzly Bear, and Camera Obscura (all like-minded bands in that they frolic wit song-form but still fulfill the emotional obligations of the songwriter), and gotten big ratings from the press (hello, 8.3 from Pitchfork for 2007’s Can’t Go Back; and “Good day, squire” for MOJO’s four stars on last time’s Can Have What You Want), I predict the California dream-rock of Fading Parade is soon going to find many a happy home. Get into it and perhaps get it out of your system early before you start hearing it in as many Barnes & Nobles and bistros as Teen Dream. It’s no surprise Quever got much of his start handling recording for 4AD, and his day job is at his own home studio (recording artists such as Casiotone for the Painfully Alone, Port O’Brien, and many others).

But it’s not all about a pleasing surface with Papercuts, and tracks on Fading Parade have the sort of substance other bands with pedigree in production lack. “Do What You Will” seems a terse rumination on a Crowleyian poseur who promotes self-magic with no mirror to see his or her lack of wardrobe; “I’ll See You Later I Guess” sounds spectral at its core when maybe studying the leftovers of a relationship withered by the other’s carelessness. That second into third track crest on Fading Parade is pretty steep, yet Quever has the goods to keep you feasting through the rest of the album, and then over again. I’ve had it a few weeks, and I’ve never played it through once. Always two or three times right after. Take that as present affirmation, sticking around.