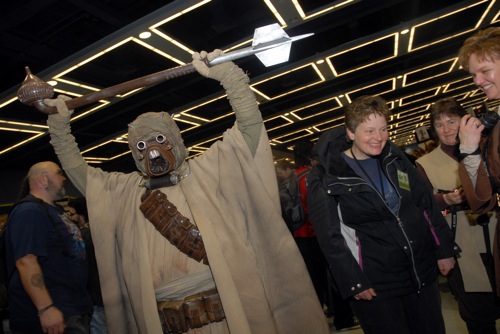 {Photo by Jim Berry from the ECCC web site}

If you’re headed downtown this weekend, you should be aware that you’re going to run into lots and lots and LOTS of people in crazy costumes, because it is time once again for the great gathering of all things comic, sci-fi, fantasy, steampunk, alien, Star Wars, Star Trek, BSG, Whedon, and more (AKA: nerd heaven) – The Emerald City Comicon. By the way, when I say nerd, I in no way mean it as an insult, as I don’t think it’s any secret that I am huge nerd about many things, and it just so happens that almost all of them will be contained within the Washington State Convention Center this weekend.

There are so many things to do at ECCC that I have to recommend you attend all three days. I have spent hours just wandering around the booths, perusing row after row of awesome books and merch – not to mention getting in line to meet a few of my idols: Felicia Day and Wil Wheaton (just to name a few). This year in addition to photo ops, the infamous Masquerade costume party, and a Buffy Sing-Along, James Marsters (Spike from BtVS) will be rockin’ the stage at The Hard Rock Cafe. *swoon*

Even if you’re not all that interested in comics, art, or drooling over meeting celebs, the sheer amount of choice people-watching is entertainment enough. Find yourself a friend who’s going (I guarantee you have at least one, you just might not know it), and have them take you on a tour of one of the greatest events in Seattle.