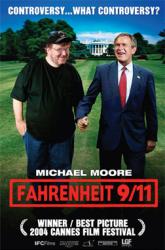 "You don't have to be in Washington to work."

By now you've surely heard about all the hoo-haw surrounding Michael Moore's lefty latest. About how it won the Cannes Palme d'Or, and incited the longest consecutive standing ovation in that festival's history. About Disney CEO bitch Michael Eisner blocking Miramax from distributing the film. About Disney then reluctantly allowing the Weinstein brothers (of Miramax, but probably not for much longer) to find other distributors (Lions Gate and IFC). About a "grassroots" group called Move America Forward (actually the same Republican PR folks who successfully badgered CBS into canceling The Reagans) petitioning theater owners not to show the movie (and claiming that a terrorist group had offered to help promote the film). Then there's curmudgeonly old Ray Bradbury's twisted knickers over the variation of his novel's title. And, most recently, Moore's struggles with the insidious MPAA over the "R" rating.

The Right doesn't want you to see this film. Which is reason enough for you to buy tickets now and get thee to the Neptune or Meridian on opening weekend.

You're in for some fascinating edification, because Fahrenheit 9/11 is a very good documentary. Moore's best and most polished to date, I'd say. It's as daring and incendiary and rabble-rousing as you've heard. And it's required viewing if you give a rat's ass about America.

A montage of television footage from election night 2000 begins the film, with the big news organizations changing their respective tunes about Gore's projected Florida victory. Dubya's horrendously self-assured boast that "We are gonna win Florida. Mark my words. Write it down" is followed with striking images of the most anger-filled inauguration day of our country's history. (I certainly don't remember seeing shots of Dub's limo being pelted with eggs before, but our news media have been guilty of omitting historical scenes of far greater import.)

Next we're treated to video clips of Bush's first eight months in office, when he spent a whopping 42% of his time on holiday. The man loves him some golf, and The Go-Go's' infectiously upbeat "Vacation" humorously plays over the highlights.

After this extended prologue, the film's opening credits begin with candid shots of George, Dick, Condoleezza, Colin, et al having makeup applied prior to TV interviews. The montage is funny, compelling, and surprisingly emotive… adjectives which describe much of Fahrenheit 9/11.

Coverage of the WTC attacks is thankfully tame, omitting the horrifying images we've seen millions of times and focusing instead on individuals' startlingly poignant reactions to the catastrophe. And then, hundreds of miles away, George W. Bush continues to read a book called My Pet Goat to children in a Florida classroom. Moore muses on what our president might have been thinking during the seven minutes he waited: perhaps the links between his family and powerful Saudis (including relatives of Osama bin Laden) were on his mind? Quite possibly, and Moore straightforwardly and shockingly lays out the history of these alliances.

Speaking of, if you're not aware of the magnitude of Bush's (and Cheney's) oil interests abroad, consider this film a wake-up call. Why were bin Laden family members and associates allowed to leave the US within days of the attacks without even being deposed? (Funny vintage Dragnet footage demonstrates how crime suspects might be questioned.) Why was the name James R. Bath blacked out of a 2004 copy of Bush's military record? (Certainly not because Mr. Bath was a financial adviser to the bin Ladens, right?) Was George Bush Senior representing America when he continued to serve on the board of the Carlyle Group (a well-connected Washington merchant bank funded by bin Laden associates and specializing in buyouts of defense companies) after 9/11/01? (The REM song "Shiny Happy People" is utilized effectively at this point in the film.)

Then there's the current administration's shoddy justification for their invasion of Iraq (via Afghanistan, and a funny doctored-up Gunsmoke credits sequence). The war's effects, told firsthand by unseen-in-the-US Baghdad footage, are then given a courageous and unexpected face stateside in Lila Lipscomb, a patriotic woman from Moore's hometown (Flint, MI) who lost a son in the war. Her scenes are relevant and heartrending; images of her reading aloud the last letter she received from her son are simply unforgettable.

As per usual in Michael Moore films, corporations don't get off too easy. About 7% of our nation's economy is directly attributable to Saudi funds (Citibank® and Time Warner® have heavy big-oil investors, for example); and representatives of Microsoft®, Haliburton®, and the Harris Corporation® have been meeting regularly to sniff out revenue opportunities in post-invasion Iraq. (If you really want to get mad, see this and The Corporation on the same day.)

But Fahrenheit 9/11 is, above all, an exposé of political hypocrisy and manipulation, and it proves to be so much more than a smear campaign against our befuddled and misguided president. There's not a cringe-inducing Charlton Heston moment to be found — the closest Moore gets to one of his infamous stunts is approaching pro-war members of Congress to recruit their children to fight in Iraq. And it's great to see the facts about this war finally being presented together, without interruptive red herrings or commercial network spin. I walked out of the theater, Neil Young's "Rockin' in the Free World" in my ears, feeling like I truly understood it all for the first time, and hoping this history-making document has the power to reach beyond its core audience to undecided voters. (I just can't fathom anyone still being "undecided" after having seen it.)

Here's a charming anecdote from Moore's website, on why he won't be appearing on evil Bill O'Reilly's Fox News® program anytime soon:

I'd go on O'Reilly but, like a coward, he walked out on a screening we invited him to (with Al Franken just a few rows away!). I personally caught him sneaking out. Embarrassed, he tried to change the subject. He said, "When are you coming on my show?" and I said, "Turn around and watch the rest of the movie and I will come on your show." He walked out. Fair and balanced.

At one point in the film, we see then-Governor Bush actually having the nerve to shout off-camera to Michael Moore, "Behave yourself — go find real work!" Well, he's done just that, and Fahrenheit 9/11 is the most important documentary of the year. It's a blisteringly clever assemblage about the people and circumstances and flat-out lies that have thrust the United States into many of its current quandaries. Go see it. Understand.