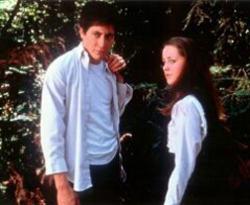 "I'm beginning to doubt your commitment to SparkleMotion!"

In the film Magnolia it was frogs from the sky. In the movie Donnie Darko, it’s a jet engine crashing through a teenage boy’s bedroom. Yes, these are plot devices, absurdist happenings that could only 'really' occur in a movie, created by film auteurs to slam into a normal story line and fuck shit up. But is it really as unreal as the nice-guy best friend finally getting the girl? Or a hero surviving the spectacular car jump over the ravine? Sometimes it takes a totally unreal event to shake us out of our own conventional ways of looking at narrative and discover new ways to find that which is truly real, truly human.

The film Donnie Darko, released during the fall of 2001, spoke to the particular unease felt by filmgoers of that dark time. At least it did for the few who saw it in theaters. Since then it has become a cult classic, taking off via video rentals. This small, unusual film has become such a minor phenomenon that it is being rereleased, director’s cut style, in Seattle as a test market to see if it has legs. What is the reason for the film’s success?

Well, Drew Barrymore saw something in the script when she decided to put her production team behind it. Ms Barrymore, Patrick Swayze, Katharine Ross, and Noah Wyle appear in small roles, but one gets the feeling that their presence does not add in a big way to the film (except for maybe Swayze’s classic sleazeball turn), nor did they bring in the cult audience.

Its star, Jake Gyllenhaal, has lately become sort of a thinking-woman’s sex symbol, due largely to the attention garnered by this role. His discovered sexiness is somewhat surprising considering how he broods zombie-like through much of this film. But perhaps the ladies are noticing the originality and riskiness of his performance. Or that creepy yet endearing smile. His sister Maggie, also in the film, has become a star in my own thinking-man’s universe, so maybe it’s in the genes. It’s a star-making role for Jake (now he gets to really explore his acting talents in such films as The Day After Tomorrow) but his looks and acting are only part of the reason it fared so well.

I would like to think the reason for the success of Donnie Darko lies in the script. In a bizarre reversal of It’s a Wonderful Life, Donnie seems to get to see what life would be like if he lived rather than if he had died squished under a jet engine. Now, for those who haven’t seen the film, I’m not really giving anything away. This wonderfully-structured script offers up many possible interpretations of what’s going on, and knowing aspects of the plot beforehand is not really going to help you find the 'answer' or take the fun out of looking for it. Is Donnie really a schizophrenic, and his visions hallucinations, as his therapist suggests? Is it possible that Donnie Darko and Grandma Death have really discovered time travel? Is all of this some grand metaphor for teenagedom, a la Buffy? Who is Frank the scary bunny? Is he a hallucination, a message from the future, or perhaps God himself sending messages to Donnie? Does the jet engine really exist, did Donnie will it to being? Is Donnie himself some kind of (sorry) Christ figure and Patrick Swayze the devil? Mix all of these possibilities together with a Gyllenhaal lost stare, some dazzling imagery (I particularly like the cutting between the the SparkleMotion dance performance and Donnie burning down the house), small touches like the spiral in the center of the jet engine (a zany clown-like God?), and an 80’s soundtrack that warms my old soul, and what you have is a killer movie deserving of cult status. Give it legs.

(Now that I have argued for seeing the film, I hesitate to add that the director’s cut is not quite as good as the original. Extra transition scenes, more information, different music and sound choices slow the pacing down and distract from the originality of the film. Seeing the two in the same week is really the thing to do. You can then decide for yourself!)