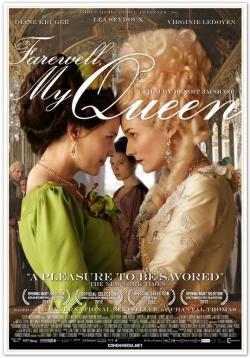 {Farewell, My Queen opens in Seattle on Friday, 7/27, and is screening at the Landmark Seven Gables Theatre}

Hey! It’s a French movie about Marie Antoinette! And her hot lesbian lover! And another chick that’s in love with her! Who doesn’t love that?

Okay, maybe I’m being a little bit of a brat. But come on, this fictional account of MA seems like a pretty obvious one, non? I’m a big fan of period dramas for many reasons—but while Farewell, My Queen had some absolutely breathtaking scenes, beautiful costumes and sets, and some pretty goddamn good acting, the love story part was missing … something.

The story hinges on Sidonie, a servant tasks with reading to the Queen. She’s kind of in love with her, but kind of not. Behind the admiration that shows in her eyes for Antoinette, there’s a bit of contempt—as well as some obvious jealous/envy directed at the relationship between the Queen and her favorite “companion,” The Duchess of Polignac.

Anyway, throw in the fact that this story is happening on the eve of the French Revolution in 1789, and you’ve got some interesting turmoil that bubbles up because of that. (If Sophia Coppola had shot this version, you can image “Should I Stay or Should I Go” by The Clash playing over the scene where Sidoine finds out about the storming of the Bastille.)

But the most impressive part of the film is really the cast, so let’s dig into it:

Léa Seydoux (who honestly looks so much like Ledoyen I would have had trouble telling them apart if it weren’t for the difference in their wardrobe – which plays well into a plot point later) rocks the screen as the too-smart-for-her-own-good Sidonie Labrode.

Diane Kruger does a spectacular job as a flighty, self-indulgent Marie Antoinette. A woman so pampered by her station in life that’s she utterly unaware of anything outside of her own wants and needs—which change by the minute.

Virgine Ledoyen, as Gabrielle de Polignac, inspires instant down-on-your-knees worship every time she enters the room, which unfortunately just isn’t often enough. I mean maybe she’s the Queen’s lover and maybe she isn’t. Who cares? JUST LOOK AT HER.

There is a lot to love here—I just like a little more romance in my period dramas. And since the romance was mostly (heavily) hinted at, with only one powerfully emotional scene in which I really felt like these women loved each other, I was left feeling a little disappointed. Where’s my tender, sobbing moment? Sure, I got a little verklempt when Marie suggested The Duchess leave her, but it wasn’t the 12-tissue release I crave from a film like this.

Still, it’s damn pretty. And that + the acting make it worth the ticket price.