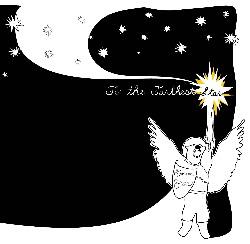 To the Farthest Star

The curse of the live band: always exceeding expectations in their live shows, but never quite transferring that energy to a recording. A band that has intensity and focus in a live show needs bring those qualities to their albums to make a difference between something that is forgettable and something that you will keep running through your head. The new Golden Bear album To the Farthest Star is not the great album that captures their live show, and that’s too bad.

This self-recorded and produced second record from the Austin-based band is a little sloppy around the edges, and was made on a shoestring budget usiing an 8 track with a single microphone. Meandering and unfocused, the album bounces back and forth between a stripped-down alt-pop sound to puffed up orchestral arrangements, trying to capture the magic of a live set, and missing the mark. Even though it lacks the tightness that is part of their live show, it is a fun and energetic pop album in its own right. Unfortunately it does not capture the imagination that a live album could.

Written with interesting arrangements, the music's depth frequently outshines the impish vocal talents of Chris Gregory. It just can't keep up with the complexity of the orchestrations running underneath many of the songs. The adept piano parts combined with the instrumentals are intricate and appealing.

The Beatles-inspired "Without a Sound," has a playful Hammond organ part where the voice of the lead actually complements the song very well. "All The Stories Ever Told" has a beautiful piano melody and is supported by a complicated chorus, as well as a couple of bluesy licks that create an intense composition. Unfortunately this quality does not run thought the album. "Galaxy Queen" has moments of bouncy pop shifting over to anthemic rock that seems to ramble. "The Devil Painted Red" is quirky but forgettable, which is unfortunate for this song that packs too many different styles of music to be a coherent whole. In fact, a lack of coherence pretty much sums up all of the problems with the album.

This album is good, but not great. If you have the option, save your money and go see them live next time they are in town. If you are a fan, this album will tide you over between shows, but it will probably not completely satisfy.