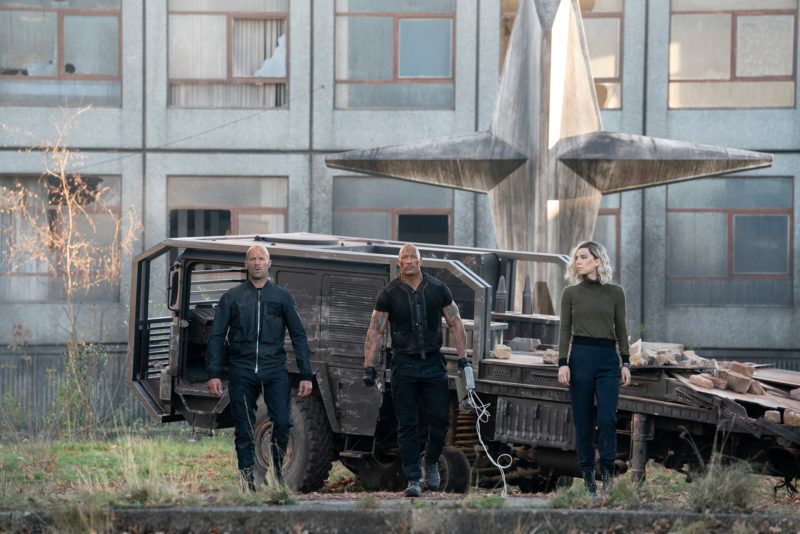 Frenemies forever! Hobbs & Shaw takes us on some wild chases and even more insane adventures than previously seen in the Fast & Furious universe.

The film opens with MI6 agent Hattie Shaw (Vanessa Kirby) on a mission to secure a top secret biological weapon. Everything is going smoothly until super villain Brixton Lore (Helllooooooooo Idris Elba) shows up slaughters everyone, forcing Hattie to inject the deadly ‘snowflake’ virus into herself in order to keep it safe. Brixton works for evil corp Etheon, a mysterious entity who controls the media and convinces everyone that Hattie killed her entire team and then ran off with the weapon.

Naturally, Mr. Nobody brings in two of his best to help track down Hattie and the virus: Luke Hobbs (Dwayne Johnson) and Deckard Shaw (Jason Statham). Of course, the last thing they want to do is work together … again, and so the dick-measuring banter ensues … again. But like, times 100. I hope you liked that banter in the last film, because you’re gonna see it in every. single. scene. These two are in. (Also, hi, yes, I did)

When they finally do find Hattie, further complications are revealed: Hattie is Deckard’s estranged little sister; Hobbs has a bit of a crush on her; and uh, she’s going to die within a few days if they don’t get the “snowflake” virus out of her bloodstream. Hey, also? The virus is airborne and will take out most of the world in a matter of weeks once it erupts inside her body.

With a machine-enhanced Terminator Brixton on their tails and Etheon blasting the fake news out again to convince the whole world that they’re criminals, the trio works to track down the scientist who invented the virus to find out how to remove it without killing her. Along the way, they also have to confront their own issues with familial betrayal and difficult reconciliations.

The car chases in this thing are of course, INCREDIBLE, and I especially loved watching Brixton and his robot motorcycle slide effortlessly underneath trucks and move in ways you don’t usually see vehicles — or humans — moving. Also, THAT FIRST BUILDING ESCAPE! Plus, the final confrontation involves some of the most insane stunts I’ve ever seen — yes, even more insane than cars outracing a submarine on a frozen lake. I loved it!

I also really LOVED that they gave Hattie a ton of her own fight scenes, in which, I might add, she nailed it! #ToughGlam — I know the next movie will involve all three of them, but I would KILL to see Hattie get a spin-off all her own.

Sure, it could’ve used some trimming: there’s no reason on earth to include all those VERY spelled out, prolonged exposition sequences. The excessive amount of drone shots over Samoa were just too much. And TBH, my interest did start to tank a bit when the story moved into more sentimental “family” territory, but I appreciate that there needed to be some balance — and also a clear tie to Dom’s reason for all the Fast & Furious chaos that ended up bringing these two characters together.

But also, who cares about those things? I had SO MUCH FUN watching this; I was able to escape from the real world for a few hours, and that’s all that really matters. My love for this franchise remains intact.