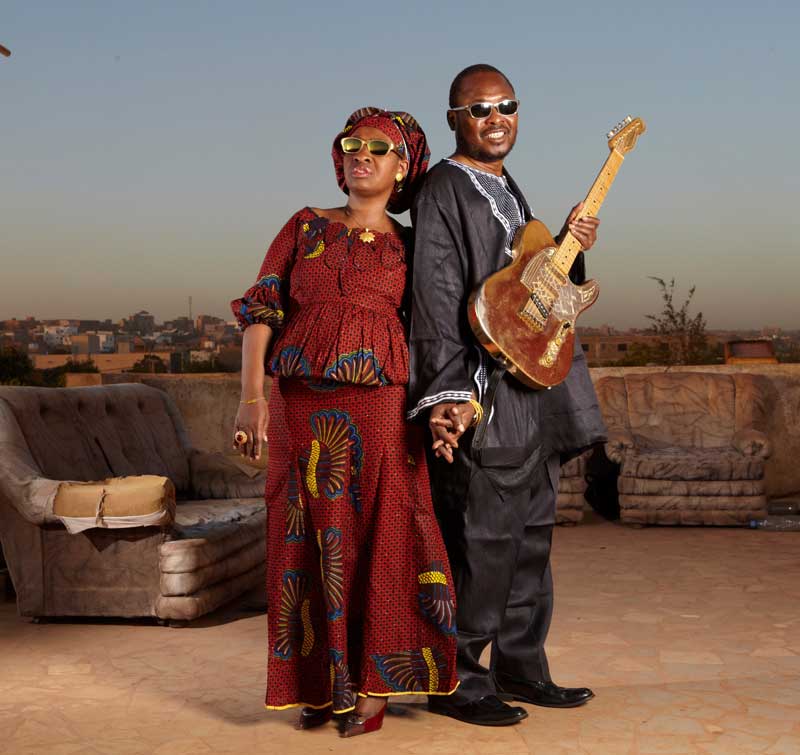 All your favorite bands love Amadou & Mariam – and you will too

They’re likely the only band to play a Seattle club of any size after writing and recording the official anthem for soccer’s World Cup in 2006 and being the ambassadors for World Food Programme and winning a Grammy and having Pink Floyd’s David Gilmour back them as part of their band and playing Matt Groenig’s curated edition of All Tomorrow’s Parties alongside The xx, Joanna Newsom, Deerhunter, Three Oh Sees, and others. It renders one breathless to reel off the milestones Amadou & Mariam have hit.

To detail the litany of talent again: Manu Chao produced their 2004 Dimanche a Bamako; Damon Albarn then produced tunes on 2008’s Welcome to Mali; then in 2012, Santigold, TV on the Radio, and Jake Shears of Scissor Sisters all took turns playing and singing alongside Amadou & Mariam on Folila, their 8th album in 14 years. Even so, the duo’s been playing since the mid-1970s, weaving in a desert-tinged spare guitar vibe straight outta Mali’s desert alongside a distinctly funky, slinky mélange of pop that has, to put it mildly, compelled an array of music luminaries from Stevie Wonder to Bono to all-of-the-above to get behind the duo. They’re an amalgam, a constant mix, a flux, and a pipeline from Bamako to Cote d’Ivoire to Paris to the club scene to the desert to the sheen of a perfect pop curtsy ahead of the freakin’ World Cup.

And now, after long ago losing their eyesight (Amadou at 16, Mariam at 5) and meeting at the sparely named Institute for the Young Blind, they make their way to the Triple Door, touring behind their shimmering, space-dance bounce of “Boufou Safou,” which has already been remixed by Henrik Schwarz, Lully, Fatima Yamaha, and Vasco. It’s an electro-pop splash, a piece of genius as distinct as their late-1990s, guitar-laced world-spanning rock. Once again, it comes back to Africa to tell the world what the world sounds like. And amidst the paranoia and cruelty being spit by the right wing at immigrants and anyone a shade darker than the White House’s kleptocrat crew, Amadou & Mariam make a great racket for resistance.