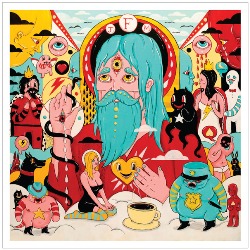 How does a Seattle boy deal with a debilitating dose of depression and then some newfound creative sparks in Los Angeles? (J./Joshua) Tillman {formerly of the Fleet Foxes} shows a gripping, glistening way how on his debut as Father John Misty, Fear Fun. It involves a lot of reading Beats and bards and bohemian travel writers; writing reams of visions and observations and humiliating admissions; listening to a whole lot of great albums from the later Vietnam era created by PTSD-shaken troubadours; perfervidly working on demos with producer/singwriter comrade Jonathan Wilson, and bringing on board Phil Ek to help mix it. Also: treehouse living with spiders, Canadian Shamans who share a little too much intoxicant, Adderall and weed otherwise, a lot of funerals, fumbling drinks, and novels needing to be written as one lives life like a "You take your chances here, pal" roller coaster.

It's tempting to hang it all on the inspiration of Laurel Canyon, the scene where Wolf Kings of the Hills wither in manses face down in champagne-drenched mink. Tillman ended up there, and it has not only resurrected the creativity of a drummer-loner in a highly successful but probably very hard-to-be-heard-in band, but also given the world a full-length that will make many best-ofs this year (just wait and watch). Besides that, for those who find other bands under the CSNY-dew sparkling umbrella gimmicky and merely lovely at best, Tillman's truly glorious vocals, completely unpredictable lyrics, and joyfully creative multi-layered music is probably going to convert many on the sidelines of this genre.

At least to this album, which kicks off with three extremely gripping and gorgeous odes to absurd existential decline, "Funtimes In Babylon," "Nancy From Now On," and "Hollywood Forever Cemetery Sings." All of them are absolute jewels, and worthy of high-charting action. But what makes this an essential purchase for anyone with even a mild enjoyment of arty folk-rock are hilarious character studies such as "I'm Writing A Novel," the Rodriguez-rhythmic "Well, You Can Do It Without Me," and the Phil Ochs-style talking blues "Now I'm Learning To Love The War."

About the only thing that bothers me on Fear Fun is the banal backbeat to one of its best songs, the otherwise perfect "Hollywood Forever Cemetery Sings," and that's only because the percussion elsewhere is otherwise so exquisite. Considering it was a drummer who made that call, I have to consider it an on-purpose crack in a cavalcade of crisply created and recorded inside jokes about the end of the New Age and the continuing time loop of being stuck in life during wartime. A life spent drunkenly dancing around the graves of loved ones and enemies, trying to find romance when everything in this graveyard is so fucking foggy.