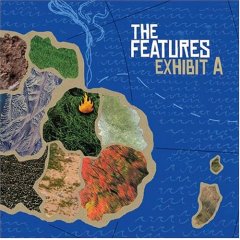 Located almost exactly between Nashville and Knoxville, Sparta, Tennessee is a sleepy hamlet boasting a population of 4599 and, to be candid, little else. But now this slight town has another claim to fame: The Features. This Sparta-bred band’s latest album Exhibit A belies the band members’ hometown origins. With a powerful mash of garage, infectious pop undertones, and desperate denim-clad rock, The Features hijack your preconceptions and brandish their pirate flag high and clear. Pirates, you ask? One look at their website and you’ll see what I’m saying.

Exhibit A exudes a brashness that I’m guessing can only be matched by the Features’ live set. Matt Pelham’s dirt-bright guitars bound through each track, the perfect match to his impetuously serrated vocals {imagine Jarvis Cocker if he’d been raised on a steady diet of Southern rock, 1970s punk, and bourbon on the sly}. Parrish Yaw’s keyboards surge between frenetic and steadfast, compounding the unpredictability of each song. The thunderous cavalcade of Rollum Haas’ drums steers a straight midtempo course that keeps your head bobbing nonstop. On the vibrant bouncer "Blow It Out," hints of the Features’ earlier New Wave roots bubble up through a strong current of forthright gritty pop. "The Idea of Growing Old," by far the prettiest track on the record, presents a heartfelt love song inspired by Pelham’s children.

In all, it’s a record you’ll be glad to own. So put that parrot on your shoulder, don that eye patch, and commandeer your own Exhibit A posthaste.