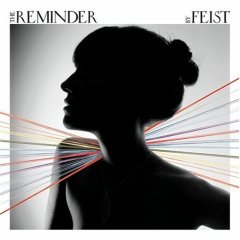 Despite having already touring North America as guitarist for By Divine Right (opening for The Tragically Hip) and releasing very decent solo record (1999’s Monarch (lay down your lonely head)), when Leslie Feist released Let it Die in 2004 she was perceived mostly as just another solo tributary spilling off the raging Broken Social Scene. Let it Die, coming two years after BSS’s You Forgot It In People (also that group’s second record, although people tend to forget the first) established Ms. Feist (she performs under her surname, ony) as a voice as seductive as BSS was rambunctious.

Three years of touring later, Feist unleashes The Reminder, an album of a dozen original tracks and one cover (the traditional “Sea Lion Woman”). The Reminder differs immediately from Let it Die in that aspect: Let it Die was almost half covers (5 out of 11).

The bulking up of originals seems a direct result of Feist having further honed the songwriting craft she displayed so well on Let it Die. Selling over 400,000 copies of that record worldwide, The Reminder takes the pop music sensibility sales like that (and a voice like hers) prove, and takes them to their next evolutionary step. Single “My Moon My Man” immediately announces a Feist who’s moved past, well, the past. The song is a liquid melody, merging current hip-hop with Broken Social Scene indie-ness, full of foot tapping hooks that rise up to the hips to force them to shake as well (see the video for the track, where Feist and a slew of dancers take over the moving walkways at an airport in a Jamiroquai flashback).

Then there is the cover of “Sea Lion Woman,” a song made famous by Nina Simone, an artist who would be great to compare Feist with if Feist weren’t such an accomplish songwriter with a guitar (see tracks “I Feel It All” and “Intuition”). But that’s not to discredit the fantastic piano work by pal and pianist Gonzales. “Limit To Your Love,” co-written by him, takes the cake as the finest song this beauty has sung yet.