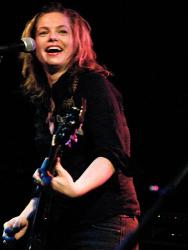 Visqueen, it's been far, far too long. Specifically, it's been nearly three years since Visqueen released the brilliant Sunset on Dateland, and I can't even remember the last time I saw Visqueen live — a tragic fact, but one that would only made the dulcet sounds and whipsmart wisecracks of Rachel Flotard even more endearing to my hungry ears.

Visqueen was bass-player-less for awhile, and have just found a new one: Barrett Jones, who engineered Visqueen's debut record King Me, and also a second guitar player, Tom Cummings (from Seattle band Once for Kicks). Armed as a four-piece, the band decided to be a bit sneaky and play a couple of "secret" shows in Seattle. The first was at the Sunset last weekend (imaginary writer Cal Ledbetter caught the show and was so blown away, he was inspired to write this Visqueen and expletives blog post the very next day). The second was this lucky night at the venerable Crocodile Cafe, with "Vaxxine" billed between Skullbot and Vindaloo. Because Visqueen wasn't properly billed, it was a pretty small crowd, and a friendly, excited crowd at that, mostly folks close enough to the band to know about the "secret" show, giving the band a chance to work out the kinks and get their live show in order before high profile shows this summer, like their upcoming Sasquatch gig at the Gorge later this month.

Those of us in attendance were charmed not only with six new Visqueen songs, but also with the always hilarious banter of front-woman Rachel Flotard. A couple songs into the set, Rachel thanked a friend of hers for coming despite her having had a root canal earlier that day. Rachel asked what exactly a root canal entailed, and her friend shouted back, "A lot of drilling and vibration." Rachel quipped: "Sounds like my last date." Another favorite moment was when she proclaimed her newfound love for blueberry-flavored Stoli. "It's like smurf pee pee and I can drink it all day," she gushed.

But mostly, we were all there for the music. The new Visqueen songs were amazing, full of the hooks and tasty guitar riffs we've grown to love from Visqueen. They opened with a new song "Hand Me Down," which featured an insanely catchy refrain of, "Come and get your love" that stuck in my head way after the show was over. From here, the band blazed through two oldies but goodies, "Sailor" and "Manhattan," which were excellent as ever; in fact, they sounded better than ever when augmented by the double male harmonies brought on by the new fellas supporting vocals. The sound was expansive and added a ton to the live show experience. The next song was also new, a power-pop ballad called "Forgive Me," which featured another frightfully catchy chorus: "Forgive me for leaving on a wave."

The night continued on with Rachel and co. delighting us all with a mixup of old songs, new jams, and Flotard banter, and the overall vibe both onstage and in the audience was jubulant. Visqueen, it's so good to have you back!