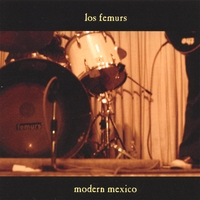 The Femurs have made some pretty great songs — a whole twelve of them, in fact. Their music is straight up giddy, consisting of acoustic guitars, drums, and dueling vocals by Rob Femur & Colin Femur (not actually brothers, but childhood friends, according to the interwebs). Sometimes they sing in perfect pop harmonies; other times they're singing separate parts over each other; but at all times, the dynamic of two male lead vocalists instead of just one makes for a full sound despite the small number of people making it.

The songs on this release are upbeat and catchy, and the guitar/drum simplicity works well for them. With a Violent Femmes-like pace and starkness, and occasional Beach Boys-y vocalizations, the songs are similar enough to each other that they create a sonic calling card for The Femurs. Their sound is consistent, and the songs are winners, though they don’t deviate all that far from one another.

The album has a lo-fi, DIY charm. You can picture the brothers sitting in their living room recording this album, having a hell of a lot of fun. Songs have playful dynamics like sudden stops and starts, changes in volume, and vocal tricks galore. Some of the finest moments come from these tricks — “September 1st” ends with great energetic vocal harmonies; “Calgon” does it again. “Crazy Girl” starts quiet and eventually erupts; “Not Giving Up” may be the most elaborate song, compositionally speaking. All of these songs are somehow intricate in their simplicity.

Put on Modern Mexico when you need some energizing; should result in toe-tapping and/or head bopping within 1-3 minutes.