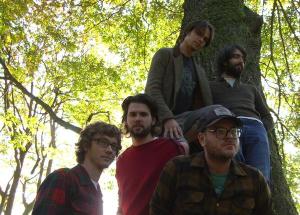 Getting the Munchies with Feral Children

Meeting up with the five members of Feral Children at local bar Redwood, where guitarist/singer Jim Cotton also works, I suggested to them a more, ahem, appealing alternative to drinking, back at my house. Six of us piled into keyboardist Sergey Posrednikov's cramped sedan.

Saying I had five feral children at my house could sound like a bunch of heathen wolf kids were tearing up my carpet, but in actuality it was more like we all vegged out across the couch and floor. They're extremely perverted, cracking gay jokes at each other's expenses, insinuating rather incriminating things. They were more like a band of brothers than just a band. Even new addition, drummer Bill Cole, strode with this group as if he too were a childhood friend like the other four. Oh, but they desperately need a band van, so if you know of one, let them know. They also have a very low opinion of Spin magazine: "Spin's a fucking joke. Kids that are almost cool will read Spin thinking it'll make them cooler, but they'll end up reading about My Chemical Romance and Britney Spears. Not that we're a trash talking band…."

I won't comment on the truth of whether there was a lot of shit talking that happened, but there was definitely a lot of shits, fucks, damns, and other various obscenities being flung around. Which is why this is the unedited version of the interview which was originally intended for KEXP's Audioasis blog that manifested itself into a TIG feature. The band is in heavy rotation currently on the non-profit station's broadcast, and they had a CD release show last night at the Crocodile.

Enough with my introduction, here are the local boys in their own words, keeping in mind they poked fun at each other with a lot of what was said:

Before Feral Children, you were Blood Alley Accident:

Josh: Jeff, Jim, Sergey, and I played in the band for a few years.

Josh: We were recorded by Steve Wold, who recorded Modest Mouse and other bands we were totally in to. When we actually started getting shows going, we met Chris through Asahi, our former drummer. Then Blood Alley broke up, we all moved away, Jim went to Alaska as like a safari hunter. Everyone did they're own fucking thing. When we all came back, we decided to get back together. Jeff played drums for BAA but he wanted to sing and do more. By the way he still plays drums. I was trying to figure out who played drums around. I half ass suggested to Jeff and Jim that we should get Chris, as Asahi was breaking up. Next thing we know we're writing songs, then Emergency Eternity, then the record [new release] came, and then Chris said, "I don't want to play anymore." So, now we have Bill.

Bill: I have a funny story about this. I was at the Redwood one night, and my friend Thomas came up and asked if I was playing drums in a band. When I told him not really, he said, "Oh rad…that's my friend Jim Cotton over there, and I think he needs a drummer…and you're it!" I was really intimidated, I love playing drums but I don't consider myself to be that good. I also tend to always be a busy person. I shimmied out the door; I turn around and Jim and Thomas [Wright, from the Can't See and Grand Archives] are behind me, pulling a cigarette out, lighting it, and taking a puff at the same time, walking towards me in the same cadence. ["It was a mofia hit, haha"] They both cornered me, and Jim was like, "Hi Bill, I'm Jim Cotton. We're about to go on tour in two months."

Jim: I was really interested in Bill for various reasons. Not just physically. [haha] But, Bill didn't call me for 10 days, so I thought Fuck Bill. We had the ex-drummer from the Catheters, who's also the drum tech for the Shins, trying out for us.

Josh: I got this call from Jim, telling me about the Catheters guy, and I say, "Yes we need to get Davey!" Jim mentioned this other guy Bill, and I said no no. I come back… and I'm playing with Bill.

Bill: I said the first night, "I know I'm really busy and I have a lot on my plate right now. I'll listen to what you have going on, and I'll tell you how I feel after." I'm at work [at Capitol HIll bar Smith] and my coworker hands me a copy of this CD from my "friend" at the bar. Jim was there getting drunk because you know, he's an alcoholic. We had a first practice, and I really liked it. If it weren't for my friend Thomas, I probably wouldn't be here honestly. Part of the reason you told Bill he should be in the band is because of a tour:

Jim: There will be a tour!

All: We are going on tour!

Jim: Unofficially, late November, early December there will be shows around Oregon. Maybe Salt Lake City. January there's going to be an entire west coast people. PRs are going to be watching us live. If we don't get SXSW this year, it'll be a suicide. There should be a SXSW tour which loops around up the mid-West and the Rocky Mountains. We'll be gone for 2-3 weeks. None of them are actually booked yet, haha. But we have played at these places…sorta. Another thing you mentioned was Steve Wold had recorded Modest Mouse. It seems EVERYONE in the reviews say you sound like Modest Mouse…

Josh: Could you play that angle off? We don't sound anything like Modest Mouse. Let's play that one down. You know how I describe that, it's because we're from the back woods like they originally were. That's all it is. But we live in the downtown part of some city, we're not living fucking somewhere in the woods anymore. We don't mind that backwoods part, but we didn't put that on ourselves. Yeah we grew up listening to Modest Mouse, we are influenced but we don't say we sound like them. Jeff: I kind of like that that's being said. Isaac Brock is a fucking amazing song writer. If we're being put in the same class as them, that's awesome. Plus, I like the pressure, it makes me want to write even better songs. Josh: Isaac Brock could shit in a bag and people would buy it. I don't really want to do that either. You need someone to tell you to shut up every once and awhile. That's what makes this band work, we have checks and balances, everyone brings really good ideas to the table.

Where do you draw influence from then?

Josh: Wolf Eyes, they're awesome and Lightening Bolt is great. We don't really sound like them.

Me: Yeah, it's one thing to be influenced and another to just sound like someone.

Who takes the pictures for the CD art? Because there's a naked man on the fucking front cover:

Jeff: The ne
w CD, for the inside cover, we had found a buried suitcase with a bunch of pictures. It had been sitting in mud for ten years maybe. There was picture of a girl in a prom dress, but the ink was all brown and smeary. It looks like puke kind of.

Jim: The other inside cover is a pair of antlers my grandfather had from hunting, dressed up with a skull from Spencer Moody. It's ironic because his CD cover also has a skull, but we did not know that until after.

Jeff: Our new new album kind of looks like the Tiny Vipers cover. [I pulled out my copy and we compared.] They both have a lantern sitting in the dark in the woods.
Sergey: But, they have a much better gloss on their cover.

What are the other details of your full-length? Your EP received a shit-ton of media attention:

Bill: As far as I know, we're number 1 on KEXP for local and number 5 for National.

Josh: I think we all feel really good about that. KEXP has been really badass.

Jim: I actually am a card-carrying member [of the station.]

Me: You recorded with Scott Colburn who recorded Arcade Fire and Mudhoney:

Josh: We recorded with Scott Colburn in a church. He has a funny story of when [Arcade Fire's] Win Butler called him a pussy. Scott had called him a pussy because an organ made him cry, but then the organ made him cry too. Scott is one of the most unpretentious people. He was on tour with Animal Collective, and just came back on Tuesday. He has a Grammy for recording a blues guy, Charlie Patton. He just likes music in general. He put on this record Wizard Prison, and it turned out to be him. He's really into fucking noise. Good music is good music is how he sees it.

Me: How did you get hooked up with him?

Josh: I emailed him a bunch. We recognized him from albums we owned. We emailed him a shitload. He's helped us with business matters. He genuinely cares about our future, and actually comes to shows and wants to play shows with us.

Jim: We're filming a video with Troy Nelson from KEXP. For the first song off of our new record, "Spy". He shot the Head Like a Kite video recently.

Josh: We're doing the all-ages Easy Street Records 26th of October. They're doing a bunch of stuff for us. They're putting ads in the Weekly. They're also going to do some sort of listening party for us. We're playing the Cha-Cha sooner than later.

Jeff: We got a thing or two going.

Well, thanks a bunch for coming over guys!

Jim: You can always smoke us out in your living room.

Jeff: Thanks for the chips by the way!

PS. You can read Jeff's "review" of my cat in their MySpace blog, titled, "Three Imaginary Cats (Isis Review.)"