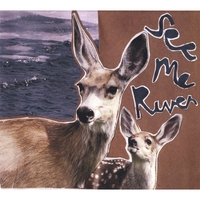 Listening to See Me River, the solo side project of Das Llamas frontman Kerry Zettel, the only conclusion I can come to is that Zettel really wasn't trying very hard. It's an acoustic album of eleven campfire folk songs that clocks in at almost thirty minutes. In the creation of the album Zettel made a number of interesting choices; for instance, he chose to record See Me River with what must have been the microphone that came standard on his computer because his guitar sounds exceptionally tinny. He then decided to bump up this tinny guitar in the mix and hide the rich baritone of his vocals. The main instrumentation is his guitar, yet he didn't bother to go back and re-record when he messes up very simple picking sequences.

Thankfully, it quickly becomes clear that Zettel doesn't take himself too seriously on this album. On "We Should Sail Moore" Zettel gives advice on what to do with women who break your heart, you should, "Put 'em on a boat / and throw 'em to / the bottom of the sea!" Halfway through the song Zettel settles into a meta-poetic breakdown where he clarifies, "Now there's some folks out there who might just think that this song is serious, just for the record, every woman who I have ever boarded a boat with has unboarded the boat safely on the other side. Except for that one." It's pretty funny, but this song still remains very firmly in the realm of novelty.

Much of the album is uninventive musically and totally nonsensical lyrically, which is not a recipe for success. "Wake the Captain" is a minute and a half long song about how a group sailed west except that the cook died and they ran out of rum. Then the song ends… and there’s no Johnny Depp to save it. "Fourteen Years" is written from the point of view of defeated soldiers who are weary after many years of war. The interesting part comes with totally campy wails that appear halfway through the song and make me wish that similarly absurd touches had been scattered throughout the album.

"Moderner" is the best song on the album, likely because it’s a dead-ringer for the Magnetic Fields. “It’s Gotta Be The Wine” sounds like an Irish drinking song and is quite fun if not terribly memorable.

There are definitely some enjoyable moments on See Me River, yet it still feels like a half-baked effort. Though I suppose that’s why these things are called side projects as opposed to main projects.