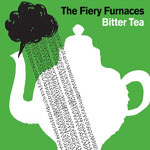 Sometimes, when I lie awake at night like I'm apt to do, I wonder if there isn't some grand joke going on around me of which I am somehow unawares. Everyone else gets it, everyone is looking at me thinking, "Why doesn't he get it? Is he just that daft?" Maybe this is normal paranoia of the universe (well, normal for me). Maybe I'm really some sort of Mulderian character who is the center of a vast conspiracy that I am only beginning to realize. Maybe you're in on it right now.

One thing I am sure of though, is that if there is a grand scheme, The Fiery Furnaces are in on it. No matter how much I try to understand the large amount of enthusiasm that surround the Furnaces like so many bees around the hive, I just don't get it. I stare. I blink. I scratch my head. Every once in a while, things get a little clearer and I think, "Hey, maybe I'm finally getting it, maybe it's all going to make sense!" only to be sorely disappointed. Bitter Tea dances around me, teases me and makes me feel like I just got off a Tilt-O-Whirl, but I just don't get it. Sorry.

Bitter Tea is supposed to be the normal sibling to last year's truly bizarre and disconcerting Rehearsing My Choir. Luckily, no old women rant on Bitter Tea but the Friedbergers seem to be caught in their own personal Inferno (or maybe it's my personal Inferno). They obviously know how to write good pop songs, as you can hear the vestiges somewhere lost in the Wendy Carlos Williams wilderness. "In My Little Thatched Hut" has a bit of a Beck-tinge to it, but without keeping the pop sensibilities that make Beck's weirdness so listenable. The song starts and stops so often you begin to lose track of when the song comes and goes.

The spaciness works better on "I'm In No Mood," which frantically switches pace as Eleanor laments, "I was so drunk last night/I didn't undress for bed." Here the focus stays clear (minus the backward-talking interlude). "Teach My Sweetheart" is rather subdued and Eleanor's tender vocals make it one of the most listenable songs on the album. Listening to a song like this is frustrating; it proves that when they want to be, the Fiery Furnaces can craft an interesting, melodic pop song without resorting to atonal segues that frighten the average listener. The Furnaces seem to reach a state of pop nirvana on "Police Sweater Blood Vow" that has an obvious Beatles-influence that drives the melody. Heck, there's even a straight-up guitar solo and catchy "na na na" bridge. They get downright rock ballad-y on "Whistle Rhapsody," a song that would almost fit in on a White Stripes album. It loses a little focus towards the end, but there is no impromptu Muppet-like keyboard solo to be found. It might be one of the most straight-forward rock songs the Furnaces have put together. Unfortunately, gems like "White Rhapsody" just make you notice the racket of other track even more.

There are some good playful, bizarre songs that work on a novelty level like "Borneo" that could be a 21st century vaudeville song that describes an odd journey to various casinos and points worldwide. "Benton Harbor Blues" has moments that sound like a 1970's soft-rock gem, but then its time-warped into a lost universe of distortion and noise, yet somehow it all works together in a surprisingly pleasant fashion. (However, the abbreviated version of "Benton Harbor Blues" has a Stereolab feel that's like a gentle summer breeze.)

Now, when we get to songs like "The Vietnamese Telephone Ministry", I begin to wonder if the Friedbergers just need to be a little more selective in their song-picking for the album. It comes across as an experiment in noise that really doesn't ever go anywhere but around and around. The same might be said for "Nevers" that just makes me feel uneasy (again, the abbreviated version is much more centered and listenable, almost like a computer game-oriented sea shanty). "Black-Hearted Boy" is just a little too technogeek to keep your attention and not just sound like a bunch of pieces stitched together in some sort of Frankensong. This might be the mortal flaw of the Fiery Furnaces: a musical version of A.D.D. If the Friedbergers could keep their sonic attention for longer periods, they could let the melodies develop into stronger songs rather than songs that feel like unfinished collages of sound.

Maybe I just like a pop structure too much. Matt and Eleanor obviously enjoy taking and creating sound hodgepodges. The Fiery Furnaces seem to tease at that throughout Bitter Tea and when they calm down enough to let the song mature gradually, they can be downright great songs. However, too much of the time on Bitter Tea, the sonic experimentation sounds just like that: experimentation that should lead to something rather than being an end to itself.