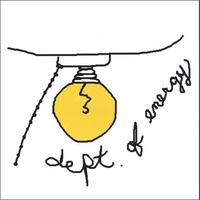 I sat at my computer yesterday, and wrote this first:

Why Department of Energy? What kind of energy do you specialize in?

Yesterday afternoon I heard back:

(Laughing) What's in a name? Montague's, Capulets… heck we just wanted something people would remember. I guess the energy part we are talking about is a force much like STAR WARS portrays, except that it's a musical force to be reckoned with.

I emailed Robb Benson from New York a while ago to see if I could ask him some questions about the new Department of Energy record. When Department of Energy formed and word got round they were working on a debut EP, I was ecstatic. A longtime fan of whatever moniker adorned Robb Benson's latest musical endeavor, the fact that he had birthed yet another band after the breakup of Dear John Letters was, to put it bluntly, fucking great.

After two records, Dear John Letters broke up the Bachelors. Then two records as DJL later, and a couple of various other recordings thrown in for good measure, Benson's solo record The Tree Mind dropped onto shelves, tragically with a definite thud. (The Tree Mind was in this humble cynic's opinion, was one of 2004's best records.)

Nevada Bachelors, Dear John Letters, Robb Benson as a solo artist, and Department of Energy all share a lead songwriter and singer, which gives the three incarnations a feeling of being cut from the same Robb mold. His voice is uncannily recognizable, finding its timbral existence somewhere between terrible and wonderful. His range is more akin to Jeff Buckley, but with a harsh quality that lends itself more to Mountain Goats or Neutral Milk Hotel comparisons. This uniquity brands just about everything Robb does.

Department of Energy's debut EP embodies some of the best qualities of all three musical monikers. Benson's high vocal nasalities are captured beautifully on his Tascam 8-track, as he and bandmates Cassady Laton (drums) and Ty Baille (organ/piano/keys) work through the high-energy rock and roll that's made Robb a staple Seattle songwriter over the past decade.

A good song can never be performed badly, which seems to be the mission statement of Department of Energy. The six tracks take on many different tones and feelings, despite there being a fairly narrow instrumentation. Opener "Song for John Voluntine" starts with a slow, eccentric electirc guitar line that forms the basis for the first couple verses in a very Dear John Letters Stories of Our Lives sort of way. However, at the chorus, it bursts with a Pavement garage-rock enthusiasm.

"Summer" busts through the garage door and takes Pavement allusions to the edge of the envelope. Here come the crunching pine cones of Robb's guitar and power chords, along with a lot of cymbals, and a lot of regret: "I changed my mind about summer / and the things that I told you," Robb sings.

"I Remember What the Light Felt Like" takes the listener on a journey similar to "Summer," but sweeter, more friendly. The tone is much more welcoming. We travel on the crunchy, recognizable guitar along a flowing hammond organ, through hills of catchy choruses and synth riffs, like driving home from the Gorge in the dark.

"One last wish for Claire Grogan" features the best vocal performance on the record. Robb screaming: "How serious it is to put a needle near anything," again and again, at various degrees of shivering seriousness. "Cowboys and Aliens" is about, well, guess; and "Lemon" closes the EP with a lovely piano ballad. All in all, quite a wonderful, well-rounded and textured EP that seems neither disjointed nor unintentional in its entirety.