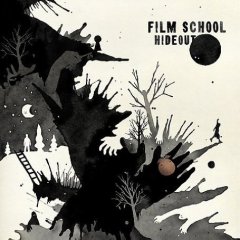 Film School has always frustrated me. The band effortlessly cultivates a deep and impalpable sense of cool in every note they’ve ever played, yet their foggy, atmospheric heavy compositions rarely crystallized like they promised to. Glimpses of space-rock perfection such as “Like You Know” teased me: they could be my favorite band! Alas, they were a singles band putting out disappointing albums… until now. On their third album, Hideout, Film School clothes their pop compositions in the same heady atmospherics and post-punk sensibilities that they’re known for, but this time out, they manage to achieve a high level of consistency. They’ve been threatening to craft an album of great psych anthems since the early 2000s, and this is it.

Hideout isn’t a major departure from the band’s previous work; the same delay heavy guitars and driving beats are here and they continue to be the current inheritors of Ride’s legacy. However, Hideout does see them joining the crowds and pilfering a bit more from My Bloody Valentine as well. This doesn’t come off as mimicry so much as an expansion of their sound. Shoegaze revivalists are a dime a dozen these days but Film School manages to mold those familiar sounds into moods that are distinctly their own. “Lectric” begins with an aggressive bass line and quickly incorporates a rapidly shimmering guitar line and Greg Bertens falsetto vocals. By the chorus the track is stumbling frantically and dreamily through an icy landscape. The mood is sort of anxious and sort of ominous and sort of something that is difficult to define and uniquely Film School.

“Two Kinds” shows Film School’s comfort with the pop format as they shimmy up close for some Coldplay or Snow Patrol style lovin’. Like those Brits at their finest moments, this song shows a band that understands what a pop song is. It shifts and moves at just the right times, ebbing and flowing into chorus, bridge and verse just when it should. The casio-strings interact beautifully with the guitar while Bertens pulls out one of the best vocal melodies on the album to create a package that is much more interesting than the two bands mentioned above. “Go Down Together” is yet another excellent anthem on this record. It falls a bit short of fist-pumping territory, but it does bathe the listener in flickering rhythm guitars while synths and lead guitars spar; and that’s cool with me. “Plots and Plans” features some shameless Loveless influence, but it’s so well done that I’m not even the slightest bit offended. The female-male vocal interaction is gorgeous and the MBV by way of Boards of Canada synth line is brilliant.

Hideout manages to flow like an album should. Though Film School exhibits an excellent command of pop, they have a tendency to let their songs become a bit bloated and overextended. Maybe one third of the tracks on this album don’t need to be as long as they are. Film School shines when they allow the atmospherics to become the icing on the cake rather than the main attraction. There are some points when Film School fails to show restraint in this respect but when everything comes together, it is breathtaking.