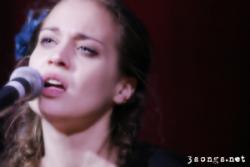 Thanksgiving Eve. Fiona Apple put on a dazzling show, her sultry voice ricocheted off the Moore Theatre's every surface; the audience hung on every note.

It's been five years since Apple's last live tour appearance, and this audience, one of just thirteen with the pleasure of seeing her on this short U.S. jaunt, was hungry. Despite the holiday eve, the place was packed; clearly many put off the trek to grandmother's house for this show.

Apple's set drew heavily from her latest release, Extraordinary Machine, as well as a good lot of tracks off 1999's When the Pawn… and a few gems from debut Tidal tossed into the mix.

Before she took to the stage, a simple white mug and saucer of tea was placed on the right side of Apple's piano, harkening her presence. When the house lights shut off and Apple and her band walked on, the crowd went nuts.

The ingénue started quietly at the piano, playing three songs with minimal banter: "I get crazy anxiety when it comes to the speaking parts of these shows," she admitted nervously. "I feel like I'm being rude — I just really don't know what the hell to say! I'm feeling good things, but…," she trailed off. But with the protective guard of her epic songs to shield her, not to mention the crowd's open-arms welcome, nerves subsided.

The audience constantly called praise throughout the set and sent loud applause her way at the conclusion — and sometimes in the midst of — each song. Challenging and well-delivered vocal passages, as well as animated yet slight dance moves, made the crowd chuckle and applaud for the once mercurial yet surprisingly down to earth singer.

At one point a small child's voice hollered "I love you, Fiona," shocking Apple into a loss for words. Sitting at her piano she gazed out at the crowd with true surprise and pleasure, commenting how glad she was to be through with her "angry song ["Tymps"] as otherwise…" She trailed off, insinuating she might not have been able to find the rage inside her after hearing such a sweet compliment from a young fan.

Lest we forget that Apple is the chanteuse who caused a press field-day — make that many field-days — when she stormed on the scene in 1996 with breakthrough hit Tidal at age 19; she was all over MTV in scant lingerie (in the "Criminal" video). The reason my brain equates Fiona with then-fiery-tempered Angelina Jolie goes beyond face value; they shared the same pouty lips and publicly-unstable nature. Apple was equally as filled with the stuff of piss and vinegar on the tortuously beautiful When the Pawn…; it was during this era when she famously stomped offstage at a New York concert. And then she was gone. Apple retracted from the spotlight and wasn't heard from for half a decade before rumblings of Extraordinary Machine started filtering onto the Internet.

After her six-year hiatus, the 28-year-old Apple has reached adulthood, and she seems composed, though there remains a bit of fit hiding under the surface. Standing alone while her band vamped during jammy tracks like "Limp," Apple looked unsure of what to do with herself (Bite her lip and stare vacantly into the ceiling? Restrain epileptic twitches of her wispy limbs? Pace and shuffle about the stage? Stand stoically still?). But for the most part she seemed almost, well, jovial. Sure, it was reserved joy, but there was a bit of glee emitting from Apple nonetheless.

When she took to center stage behind a solitary microphone, the waifish singer's black drapey dress, tied with a bright red Japanese obi-style belt, flowed around her, the shocking turquoise flower tucked behind her right ear lending a note of artistry to her ensemble and making those big blue eyes shine.

While Apple's frame and speaking voice aren't mighty, her heavenly song voice rose to the rafters. Several attendees commented later that the sound was not great up in the top balcony, though where we sat in the first balcony it sounded beautiful. For the stately "I Know," Apple stomped and growled and fought her way gorgeously through the heart-aching lyrics. It was during this stirring performance that something struck me: the crowd was dead silent. When is the last time you attended a show when no one was whispering or even rudely chattering away during a moving moment?

The stunning show beckoned the question: where has Apple been hiding all these years? Why has she kept her talent under wraps? According to her official bio, she simply was not in a creative space. "I don't really worry about it when I don't feel creative, because it always happens in seasons," she says on her website. "Since I started playing piano, there would always be a year or two when I wouldn't play at all. Or there would be an art season, where it's not about making music but about making art. But when I'm not in it, I'm not in it, and I believe it's just as important to have those spells in your life. Everything contributes to what you produce."

Much of Apple's new material carries a percussive, circus-y feel. Married with her dark and moody timbre, the wash of purple and red lights, and the theatre's historic setting, this evening's show was truly a performance, not just another concert. At the conclusion of her band's final song, "Criminal," Apple was treated to the ultimate compliment: the standing ovation. She then lingered on stage and announced she'd play one final song, solo, and though it would officially be an encore she was not going to bother walking off stage just to come out again. Instead she sat at her piano and ended the night with the lilting and introspective "Parting Gift."

Opening act David Garza alit the stage with a brief set. His storytelling style mixed with the sparse guitar, vocals and harmonium-only set made for a fitting opening to Apple's cirque-inspired repertoire. Both Apple and Garza — who later returned to the stage for two of Apple's closing numbers — are performers seemingly not of this time; both are more troubadour, less tricked-out pop star. The pair were a perfect fit for a dramatic night of music.