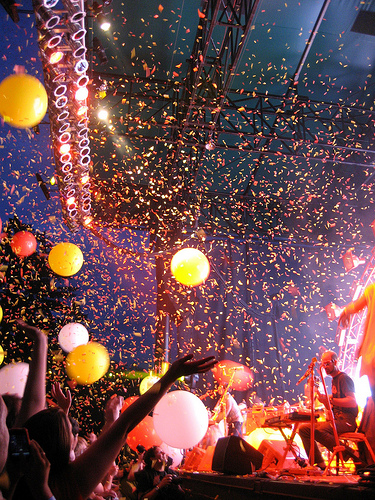 The Flaming Lips are a piece of the beginning of a very long musical story for me. Country girl moves to city, meets guy in Tripping Daisy shirt, gets musical education and learns some hard lessons about life. That Tripping Daisy guy brought over the Soft Bulletin record, and my life really was never the same again. I can recount many nights spent with my best friend in my Camaro, seats laid back all the way, smoking a joint and marveling over Soft Bulletin or Clouds Taste Metallic. I’ve spent all these years pining for the Flaming Lips, embracing all their weird projects (hi Zaireeka) and geeking out on each release they put out. Finally seeing them perform, and in a venue so beautiful and comfy as Marymoor Park, was the culmination of all those years of anticipation.

Stardeath & White Dwarfs, the opener, is an Oklahoma band as well and the lead singer just happens to be Wayne Coyne’s nephew Dennis. I give absolute props to them on the fact that they opened their set with “Sweet Loaf” from the Butthole Surfers. That song set the tone for the rest of the set, swirling psychedelia punctuated by seizure-inducing disco light flashes. The raspy-voiced Dennis sported nifty white jumper pants with suspenders, channeling classic rock mainstays like Black Sabbath or Pink Floyd, with a sprinkle of the weirdness of Can. Topping off their set was an overly dramatic and bro-rocky cover of Madonna’s “Borderline”, which would have probably been better left to queen of pop herself. 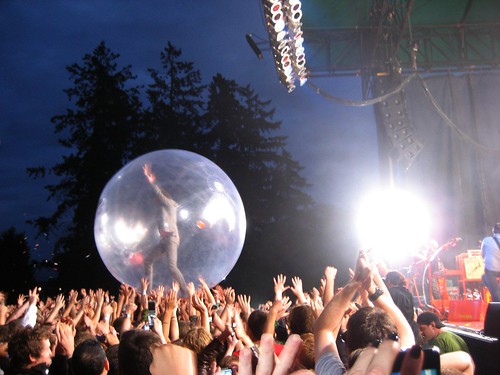 Wayne and the crew were busy little bees onstage setting up for the show, so I thought I had time for a beer garden run. Unfortunately (uggh!) I missed the opening but I DO know that there was a naked lady on the huge video screen towards the back of the stage. The camera proceeded to zoom in on her as she was about to give birth, and then suddenly the screen opened up and the band walked through her vagina onto the stage. Talk about an introduction!

“Race for the Prize” off the lauded Soft Bulletin started their set, soft and delicate. True to form, Wayne was onstage jumping around frenetically waving streamers in his hands, signalling the release of the shower of confetti and large balloons that traditionally mark the beginning of their shows. Life-sized bunnies were dancing madly side stage (previous shows have included teletubbies in their place), and right on queue for the third song “Yeah Yeah Yeah Song” a huge gorilla lifted Wayne up on his shoulders and walked around while Wayne shouted the lyrics through a megaphone. The wacky display was sensory-overload and an integral component to hearing their songs live. The Lips’ live show is a visual representation of how the music sounds on record. The cacophonous events that happened onstage served as an extension of the normal senses that we use to enjoy music, and that’s why I love this band so damn much. 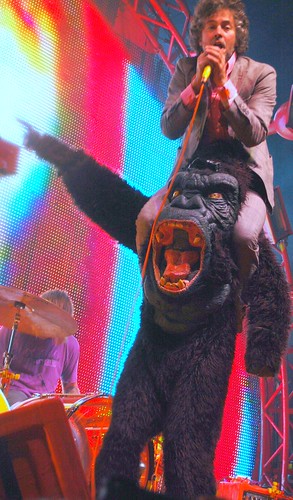 Wayne Coyne is an excellent front man; energetic and charming, and a true showman. He’s a fan of the empowering fist pump, and most of the show found him singing while emphatically holding his fist in the air. Throughout the show he expressed thoughts of encouragement and positive-thinking and introduced “Bad Days” (the only song they played off Clouds Taste Metallic) as a song “about the ability of the power of your mind to dream a little bit and make it all a little bit better”. They even played their own somber, yet beautiful, version of “Taps” and encouraged people to hold their peace signs in the air, saying that the band had vowed to play this song everyday “until the war fucking ends”.

The new material that they played from their upcoming release Embryonic, like “Convinced of the Hex”, was almost a bit of return to form for them, more psychedelic, slower and sludgier. The stage was foggy and atmospheric for most of the last half of the set, the antics onstage getting odder as the songs went on. “Yoshimi Battles the Pink Robots” was a crowd-pleaser of course, eliciting a lot of singing and swaying from the audience. During “Pompeii Am Gotterdammerung”, a moody song in it’s own right, the red and white light show extended to light up all the trees surrounding the venue, creating an arena-like feel around the crowd. It was strangely beautiful and a perfect accompaniment to the transcendence of that particular song. 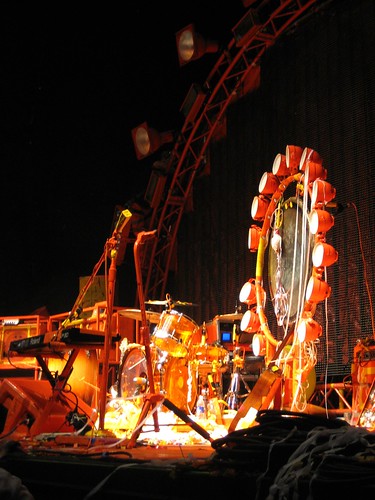 The last song before their encore, which they preempted with “Come on guys, we’re just going to go off now for a second”, was their biggest single to date “She Don’t Use Jelly”. A TV clip from “The John Stewart Show” (where they played the song in ’94) was played on the big screen behind the band as an introduction to the song. Even the most jaded Flaming Lips fan couldn’t resist the bombastic drums and off-kilter energy of the song, the crowd escalated into a joyous uproar. After a brief walk-off and the subsequent cheering (they were filming that night) the whole band returned for one last go-round with “Do You Realize?”. It was drawn out and sweet and a very apt ending to a sonically and visually astounding night.

I can’t help but mention my disappointment in the lack of songs from Transmissions From A Satellite Heart, Clouds Taste Metallic and Soft Bulletin. But they WERE touring in support of a new record, one which sounds promising, surreal and as ever-evolving as the rest of their magnificent catalog. Wayne Coyne was God, and his band the disciples as they marched through the set, enticing the crowd to love them. It would take a cold harsh heart not to feel the swell of promise, joy and love that exude from one of their performances. So be jealous if you weren’t there… because that jealousy is TOTALLY warranted.