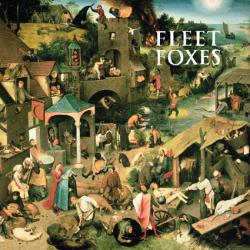 To say that hype and expectation surround the Fleet Foxes' self-titled debut album would be an understatement; it may be the most anticipated album of the year. And in this blog-happy world where bands become larger-than-life at the drop of an internet single, it's easy to get lost in a world wide web of hype. But Fleet Foxes is an album that can hold its own, regardless of press buildup, internet presence, and buzzworthy tours.

"Ragged Wood" finds the band filling the Band of Horses-shaped hole that's been gaping in the Emerald City's heart ever since their departure to East Coast. In the process, the Fleet Foxes builds off Everything All the Time, while producing something more crafty and mature than the Horses' debut album ever did.

"Your Protector" reads like a slowly rising sunrise, shedding a blinding light on any shadow of doubt surrounding the band's potential. Tambourine taps and swooning flute lead into a blast of music and death, frantically cramming the band's feet into Seattle's glass slipper before anyone else inherits the throne of the rising stars.

"Tiger Mountain Peasant Song" is something you'd get if James Mercer spent too much time at Renaissance fairs. The pine-soaked, minstrel serenade promises to "follow you softly through cold mountain air" but incessantly obsesses over death in the process.

The album's biggest rut is "Meadowlark," a three-minute drumless bird ballad which isn't so much a bad song (it's actually quite beautiful) as it is a momentum killer. But in an album full of well-greased folk mechanisms, it's tough to slip in a stripped down track without being a little jarring.

"He Doesn't Know Why" is the album's crowning achievement, as the singer Robin Pecknold admits helpless defeat ("There's nothing I can do…there's nothing I can say"), while blasting his lungs over a wall-of-sound buildup that could make even Phil Spector shed a tear.

Overall, finding a weak spot in Fleet Foxes is about as easy as flipping through a half-dozen Northwest publications each week and not spotting the band mentioned somewhere.

Sure, the album borrows bountifully from a wide span of admirable musical sources, but can't a log cabin remain beautiful in the very forest it was built from?