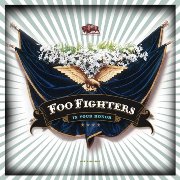 Two CDs. The Foo Fighters went and did a double-disc record. Thankfully it's not one of those Dual-disc CDs like the new Springsteen, where it seems there is no way to touch the disc without scratching either DVD or CD side. Those are difficult enough to handle. No, Grohl and Co.'s new one is a pretty basic two-disc package. One CD stacked behind the other. And the artwork is a bitchin' painting of a bull — the head on disc one, the ass on disc two.

The Head-of-the-Bull disc is all rock and roll, heavier than their past albums, the "Nirvana-meets-Sunny Day Real Estate" lineup actually taking a cue from their past bands and making more obvious their former monikers which, up until now, have been barely discernable.

Grohl wails away on the opening, title track, "Can you hear me?!" while a Phil Spector-approved wall of sound/distortion backs him up and guides the songs into the Foos' best drummer entrance since the beginning of "My Hero."

The first disc of "In Your Honor" manages to push the band into a heavier and more raw sound than their past, singles-happy records. And despite the uber-popularity found with MTV Music Video awards and Dawson-Leary-getting-the-shit-kicked-out-of-him-while-Grohl-screams-away-on-the-soundtrack in "Varsity Blues," this record is a treat to any of the naysayers whom still listen to Sunny Day's "Diary" religiously.

And don't take "Best of You," the single, as an indication of the rest of the album. If you're serious about music you should have learned by now that a single, especially from a band on a major, is more than likely the worst track on the record. In Your Honor has some far better tunes.

Oh!!! Wait!! There's the second disc, the proverbial Ass-of-the-Bull disc. (Really, the artwork is Bitchin'!) and the Ass is, for the most part, Ass-coustic. (The Bull's bark is louder than it's fart, I guess you could say.)

Disc two isn't surprising, if you don't count the Norah Jones duet on "Virginia Moon," (which is very much like you think it will be, the surprise is the fact that exists).

Save for the duet, the acoustic disc is pretty straight-forward. Imagine The Colour and the Shape being sold in Starbucks as an all-acoustic re-release, and you've pretty much got it. Not at all a bad thing, but there's not much more to say.

So yeah, that's about it. Just for a real-life anecdote, I gave the record to a Nirvana and Fugazi nut at work, who was making some offhand, duragatory remarks about how Dave Grohl and Nate Mendel have gone only downhill since Nirvana and Sunny Day. He digs the shit out of the Bull's Head. So that's something.