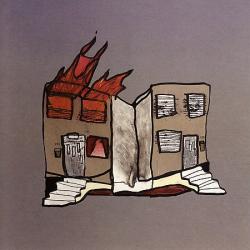 Fred Thomas immediately strikes me as the kind of artist whose work is so very personal and introspective that anyone outside of him can't possibly understand it that way he does. That's my nice way of saying that I find the songs on Sink Like a Symphony undigestable and largely unlistenable.

The album starts off with "I Fell In Love With the World," on which Thomas's warbly vocals waver unstably like a mid-puberty boy's. In his best moments, Thomas sounds like an early, unripened version of K Records artist Jason Anderson, but Thomas doesn't come close to Anderson's spirited passion. Sink Like a Symphony is comprised of many serious, bleeding heart ballads, with a few detours into upbeat territory, like "The Curse Is Broken! On To New Curses!," which, in the second-to-last position on the album, may arrive too late to reverse the effects of the preceding downers. Plus, as it winds down, it evolves into an almost 3-minute drum solo. Dude. Why? You were finally getting somewhere. Such strange decisions only serve to confuse and confound.

Another comes on "Wet As A Cloud," when Thomas takes an inexplicable 13-second pause smack in the middle, then resumes the song as if nothing happened. Sink Like a Symphony is more like a first-timer's basement recording, with some songs sounding so raw that you'd think Thomas was in the room with you. There's a feeling of incompletion about them, and it comes across more like a demo album. If that were the case, I'd say that Thomas may get somewhere once he finishes composing them and fleshes out the sound.

I'm not talking about studio polish or flair; in fact, one of my favorite bands, Antiques, has proven that phenomenal things can happen in basements. What Thomas is missing is substance. There are moments when he seems like he's about to hit the mark, like in the climax of sounds that begins the fade-out of "Apples on the Floor." But, whether intentionally or not, he always seems to stop short.

The personal experience of making music is exciting and fulfilling, but you have to know when something is waaaay more fulfilling to you as the creator than it could possibly be to the listener. Thomas has potential; hopefully his songcrafting ability will ripen.