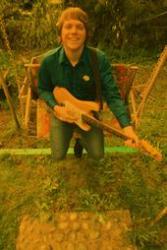 The Thieves of Kailua CD Release

In 2004, readers of this website voted United State of Electronica’s self-titled, self-released debut album the best of the year. Though they've remained one of the most loved bands in Seattle since, the band's show schedule has been sparse and they've yet to release a follow-up. As Megan Seling of The Stranger explained, “after a late-spring show at the University of Washington last year, the band went on hiatus. But a planned two-month vacation — downtime to allow U.S.E's members to focus on their other bands and/or get married (three of the seven tied the knot in the last 12 months) — snowballed into a year.”

One of those such projects was The Thieves of Kailua, a Hawaiian-themed band led by USE guitarist Jason Holstrom. July saw the release of a self-titled disc of 14 tropical pop songs on Mill Pond Records and last Thursday was the CD release celebration at Chop Suey. The Capitol Hill rock club got into the act by offering specials on rum-based drinks all night (including $4 Mai Tais, which combined with a $10 minimum for credit card tabs and an “out of service” ATM machine had an effect on my evening, but that’s another story for another time) and the band dressed in floral prints and decorated the stage with tropical plants and tiki statues.

Holstrom told the Seattle Weekly earlier this week that he was inspired for this project by having his car burglarized while on vacation in Kailua, an area of Honolulu that is known, according to Wikipedia, for having one of the best beaches in the world. He began writing the songs for this project in 2003.

Although Holstrom sings and plays nearly all of the instruments on the album, the live show last Thursday was anything but a singular event. He played ukulele but in total I counted 11 band members on stage through most of the set (including other members of USE) – and that was before introducing a horn section later in the set. I didn’t bother counting the people on stage at that point (it gets back to the sentence on the $4 Mai Tais).

Hawaiian music often conjures up memories of Don Ho and kitsch, yet with this project in Holstrom’s hands it is anything but kitschy. Although all of USE’s songs in one way or another were about love, it was never an insincere band. The same is true of the Thieves of Kailua. Even with the unfortunate events that occurred on the 2003 vacation that were detailed in the title track, that song is still an upbeat pop song that envisions the thieves being caught by karma and persistence.

In both USE and the Thieves of Kailua there's a common thread of joy, celebration, and escapism that runs through the music, even if the bands are on opposite sides of the lo- and hi-fi spectrums. Take this call and response from USE’s “La Discoteca”: “in the mood for celebration? Give it up, we’re on vacation! It can really come together; This holiday can last forever!” Then on ToK’s “Under Setting Sun” Holstrom sings, “living in heaven, away from it all…Eighty degrees and it rains every day, you’ll have it lovely, all your woes are on the mend.”

According to ToK’s MySpace page, this album was scheduled for release in February but pushing it back a few months makes more sense. This is a carefree record that deserves to be celebrated in the summer. Thursday night Chop Suey was filled with a few hundred people dancing to songs that are unlike nearly anything else you’re likely hear all year. Congratulations to Jason Holstrom for creating such music and to Chop Suey for giving it the celebration it deserves.