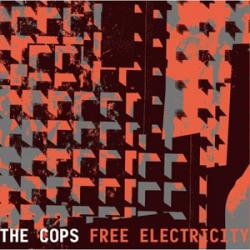 I’ve now listened to The Cops’ second album, Free Electricity, about 7 or 8 times straight through over the past 4 days and I am no closer to figuring it out as I was after the first spin. My enjoyment of the album is unwavering, yet I find myself asking if I love this record because it’s a great record, or do I love it because it pushes the right buttons in my psyche? Regardless, it’s not every day that you find a record that simply knocks you on your ass – but that’s exactly what happened to this powerpop-loving writer.

Free Electricity celebrates everything I hold dear in rock and roll: dual-part, jerky guitars riffs layered upon a hard-hitting drum beat with a bassist who is not left many openings yet somehow finds them and dives the tempo by weaving in and out of the ones he’s given, and then add on a singer with a powerful voice and enough range to fit the dark mood of each song. Free Electricity rocks with an urgency not commonly found in indie rock today. In fact, it's hardly fair to call the Cops an indie rock band (with all due respect, the Arcade Fire doesn’t rock this hard and neither does Wilco). I prefer to say the Cops are a classic rock band that hasn’t become classic – yet. They are a throwback rock and roll band free of bullshit, like in the tradition of Black Sabbath or Led Zeppelin, just with a garage-ier sound.

“Modern Black Flats” could be a generational anthem if it gets heard by enough people. I’m not sure if it is an update to the Clash’s “White Riot” or the Mekons’ “Never Been in a Riot” – albeit for an era where the stakes are considerably lower (or maybe the apathy is markedly higher). When frontman Michael Jaworski sings on the record’s catchiest song, “There’s blood on the sheets, Blood on the Tracks, blood on the walls of the modern black flats, blood on the seats of your Mercedes Benz” you can’t help but think he’s anxious for someone to throw a trashcan through the window of a Starbucks or commit some other act of anarchy just to shake up the status quo.

The last song, “N-99”, is my favorite. In it, Jaworski looks for some excitement in the seedier sections of Aurora Avenue (at least I think that's what it's about). He growls, “Take a ride with me up 99, make a right just past the neon sign, I got a hundred dollar bill, let’s have some fun, I’ve got a hundred dollar bill, let’s get it on.” Andrew Church’s basslines are understated but obvious – especially during the brief moments when they are layered below only Jaworski’s vocals. They drive the noir-ish feel of the number.

Listening to the Cops makes you realize that this band is more than the sum of its parts. Sure, there are great individual moments (Church’s aforementioned basslines on “N-99” or on the title track where you realize that David Weeks is a rare breed – a powerful drummer that is not in love with the sound of his own fills), but the Cops come together and find a common ideology and consistent sound.

If that, my friends, is not rock and roll, I don’t know what is.