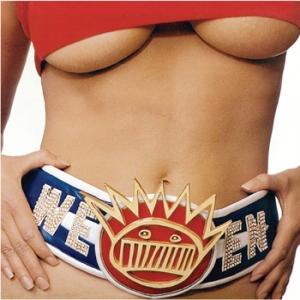 I had a number of friends in college who were unhealthily obsessed with Ween. I sort of chalked it up to people who found themselves either (a) too cool to be obsesses with They Might Be Giants or (b) too young to be obsessed with the Dead Milkmen. Most of my pre-college Ween exposure was the brief period when “Push ‘Th Lil’ Daisies” was an odd sort of hit on the local Boston modern rock station (or rather that “hit” I should probably use the word “device of torture” for most listeners, but that is a story for another day). I, personally, have never been obsessed with Ween, but I do find them amusing in the sense that they are like the tofu of modern rock, soaking up whatever flavors they are near and becoming that flavor. I mean, they’ve release country & western albums, albums of sea shanties, albums that are utter noise, you name it. Now, “Spirit of ’76” always struck me as one of their most insane songs, mostly because suddenly Ween sounds like they’re the lost lovechild of Marvin Gaye and Prince. The song itself is about Philly and even though it apparently gets some facts wrong – like the filming location for Mannequin, it is one of the few musical odes to the City of Brotherly Love, and for that I give it props. However, listening to the crazed falsetto, strummed guitars and references to “ho’s” on South Street, well, really, Ween found a perfect formula for a twisted pop song.