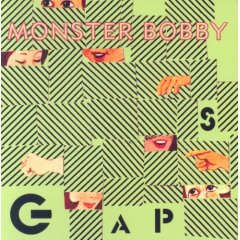 On Monster Bobby’s MySpace page, he lists “Sigmund Freud” as being among his top friends. I found that interesting because while trying to decide on an angle for this review, I was trying to figure out which of his two primary projects would represent his id, ego, or super-ego.

The Pipettes would be Monster Bobby’s id. The concept of contemporary girl group is largely his idea and is often referred to as the band’s Phil Spector (although, presumably with much less bloodshed). The band is based on the premise of seeking immediate pleasure and gratification. Their songs are instantly catchy and easy to enjoy. They are not exactly difficult to look at, either.

By contrast, Monster Bobby’s solo output is almost the exact opposite of the Pipettes. Trying to resist the label as their “svengali” either out of genuine modesty or because the term brings about all kinds of ookey connotations (like the aforementioned Spector and notorious boy band manager-cum-accused Ponzi schemer Lou Pearlman), he has his own moniker to experiment under. The songs are raw, challenging, and far less accessible. His debut LP, Gaps, is a much more “grown-up” record than We Are the Pipettes. The contrast would make his solo work the super-ego.

Gaps is, on its surface, a difficult record to enjoy. Most of the time it sounds like an album recorded in his bedroom. Some of it is surely deliberate, but still not any less distracting. He relies a lot on electronic means for most of his music: a laptop making sound effects and a drum machine are the most obvious. He also does not adopt a lot of formulaic songwriting structures (verse/chorus/verse, etc…).

Yet, even though it's a difficult record to enjoy, it's not impossible. There are many things he does very well. Even when Monster Bobby leans toward the avant-garde (“A Bureaucracy of Angels” is mostly two minutes of static), he still cannot entirely escape his pop sensibilities. Many of the songs here are short, well-written pop numbers.

“Blah Blah Blah (Give Up)” could be found on an oldies rock station and no one would notice it was from 2007, not fifty years earlier. It’s less than two minutes long (the longest track on Gaps is less than 3 and ½ minutes) and has a female backup singer that sounds great against his much deeper voice (which sounds a lot like Morrissey's throughout the album).

“Let’s Check Into a Hospital Together” is probably the most unusual pickup line you’re likely to hear set to music, but it makes for a memorable, if somewhat offbeat, song. He manages to bring to mind Johnny Cash, the Smiths and REM almost simultaneously. And clocking out after 64 short seconds, it could easily fit on to a mix CD for a crush (provided you’re both a little eccentric).

Each song on Gaps is significantly different from the one before and after it. One song is acoustic folk and the next might be electro pop. It doesn’t make for much continuity or an overall theme and not all of the chances he takes work successfully but enough of them do to make the record a pleasant surprise. I would estimate that roughly two thirds of the record works, but as one rock icon put it at least a generation ago, that ain’t bad.