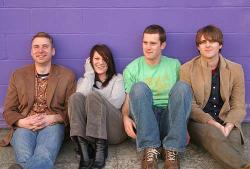 Walking into a Friday Mile show was like stepping into a John Hughes movie. The locale of their CD release party, Chop Suey, with its paper lanterns and deep red walls, helped. Throw in a disco ball and you could have easily picked Molly Ringwald and Judd Nelson out of the crowd. There’s something about Friday Mile’s vibe that is so second-hour-of-an-80’s-movie, it makes you wonder when the slow-motion is going to kick in.

I’ve seen Friday Mile a couple times now, and this was the first show where I’d seen them as a quartet, as opposed to Jace Krause (vocals, guitar) and Hannah Williams (vocals, keyboards) in duo mode. Jace and Hannah are great as a duo, but Chad Clibborn’s laid back drumming and Jake Rohr’s subtle bass work elevated the songs to a new level. This band is good, in the objective, talented-at-their-craft way. When you watch them, you feel like you’re in good hands, and yet there’s still a dose of youthful nervousness on their faces.

Both Jace and Hannah have great voices, they’re both easy on the eyes (the whole band is), and they managed to weave a natural chemistry on stage that led you to assume that they are, or will someday be, romantically involved. (Note: I have no idea whatsoever if that is the case). And the most tantalizing thing is that they do this with their voices. The two barely looked at one another on stage: it was just another band taking care of business. But the way their harmonies intertwined, and their breathy voices courted one another, you couldn’t help but to script their eventual Behind the Music special in your mind.

Yet there was to be no overt romance on stage at the Chop, due to the special appearance, all the way from Montana, of Hannah’s mom, playing cello. Er, there is much I could say at this point to all the boys out there, but I’ll be brief: yes. And her cello playing was lovely as well.

So, here’s a band with appealing looks, an accidental nostalgic vibe, an invitation to dreams of leading man and lady romance, and a torturously attractive dame to boot. All of this contributed to the most memorable moment of the night, when, nice and early in their set, they began to play their song entitled "Curtain Call." Check out this song on Myspace. As they broke into it, the slow-motion moment began. The disco ball dropped from the ceiling, spotting the walls. My hefty single bourbon sweetened. The backs of random heads suddenly became possibilities: would that be Erika M. from high school, the one I never told? Would that be Sarah R., the one who never told me? Would that be Tina, the one who told me too often? Was Hannah single? Jace? Or even better. . . Ms. Hannah’s Mom looks a bit like Ms. Goetz, the art teacher that got away… Why was I wearing a faux-silk cumberbun? Why didn’t I use more hairspray? Where do I put my hands during this slow dance?

The room eventually returned to normal spin, and the set continued. Friday Mile alternately rocked and serenaded. Jace’s guitar ripped the room, and if you like your drumming sparse and elegant, Chad submitted one of the best performances in town. All that, and you get to leave humming a song or two that somehow remind you of a movie, one that you could imagine yourself starring in.