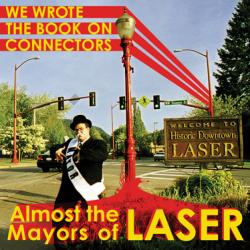 Almost the Mayors of Laser

If We Wrote the Book on Connectors were your little brother, you’d want to pinch his cheeks, get him in a playful headlock and proceed to give him a noogie. These silly songs about eating cake, severed limbs, and Mexican health supplements will make you grin as you bob your head up and down to the bouncy beats.

On their debut EP Almost the Mayors of Laser, the four boys of WWTBOC (the self-proclaimed "band of the future") rocks through six tracks of ultimate fun. Mike Votava, Travis Young, Rick Weber, and Ben Baier construct brilliant — as they put it —"mustache rock" (ironically, no members have mustaches), with lyrics that’ll make you both laugh and scratch your noggin.

Upon hearing Laser’s first track, "Gonna Eat some Cake Tonight," I thought this band might be deep thinkers about what’s going on in the world and our place in it. With lyrics like, "Are you impressed? We’re gonna take a ride on the cake express” and “Check out my new kicks/what is goin’ on?” I thought there was a possibility that the band was giving a deep social commentary on celebrity, comparing it to Marie-Antoinette-era excess. But by the next track, a fun little ditty about a "Mushroom Chair" (“Furniture with attitude/growing in my living room”), I knew the band more than likely were not making those comparisons, and rather, just singing about eating cake.

Again, although you may not be a D&D player, you will not be disappointed in this band.

There are certain aspects of WWTBOC that can be related to early Barenaked Ladies with their silly lyrics and an ear for good pop melodies. You could say this music is for the younger folks, as indicated by the line “Baby you can do what you want ‘cause we’re in sixth grade,” from “2007 Kix,” but We Wrote the Book on Connectors’ music and incredibly fun live shows span outside the pimply-faced demographic to create an all-around experience everyone can enjoy.