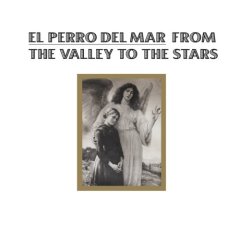 From The Valley To The Stars

Sarah Assbring's second full-length for The Control Group as El Perro del Mar is a perfect definition of the word 'album.' It is a 16-track cycle of relaxed, sweetly melodic, organ-kissed soul music — 'soul' in the sense the Beach Boys had soul, the teenage symphonies to god kind of universalist nature-loving soul music — in which hardly any particular tracks stand out, but the whole thing taken together is rewarding.

Assbring's first album for TCG (a collection from a handful of limited European releases) had many more rough edges and much darker lyrical turns, dealing with low self-esteem and relational despair. The often acoustic-strummed music seemed a combined attempt with the plain and sometimes pained words to simplify the dimmed twists in the mirror of the spirit. From The Valley To The Stars seems like a genuine attempt to evolve a new pattern from such stark revelation, based in the almost-minimalism of the previous album.There seems to be a stronger desire to heal the hurts of the heart, though: The lyrics are even more basic, rotating around generic gospel imagery and optimistic phrasings, and the loveliness has been expanded, guided along by collaborators' Bohlin's oboe, Deramus's double bass, Ford's horn, Lidell's trumpet, and Synneby's vocal and sitar. Those instruments aren't adornments — there are no rocking backing tracks to any of this. It's Sunday afternoon parlor room soft and proudly so.

The song titles indeed say it all — "Do Not Despair," "The Sun Is An Old Friend," "You Belong To The Sky Now" — and what is left to do is just curl up with the record's warm joy, if you're so inclined. Kind of like — and I don't mean this in any critical way — a musical version of the Teletubbies, which I used to zone out to after a ferocious night of partying. For those who loved the Velvet Underground's moments of chemically-soused grace ("Sunday Morning," "Jesus," "I'll Be Your Mirror") but wished for something without any coarse irony, El Perro del Mar has the non-denomenational praise you can't help but absorb.