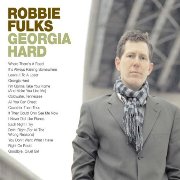 Robbie Fulks' first album of new material in four years can't help but be something of a disappointment, if not in its songwriting (which is as strong and witty as ever) then in its narrow scope.

2001's Couples In Trouble found Fulks at his most ambitious, experimenting with rock and pop forms on a dozen love songs which, while uniformly bleak, largely eschewed his tongue-in-cheek snark for intricate storytelling. While it was always clear that he would never be part of the country establishment (though his songs are well-crafted enough that several from each album could easily become hits in the hands of a more compliant vocalist), Fulks here announced that he was not merely out to subvert one genre, but to expand his songwriting into several, whichever provided a big enough canvas for his tales.

Georgia Hard marks a return to straight-ahead country, and while these tunes are full of well-defined characters and clever turns of phrase there are times when the punning titles and two-timin' hicks start to feel a little like bitterness towards a country audience that didn't take too kindly to those deviations. That becomes explicit on "Countrier Than Thou," a companion snipe to "Roots Rock Weirdos" which targets the down-home pretensions of both blue state No Depression-ers and a certain red state president. "I'm Gonna Take You Home (And Make You Like Me)" is an unabashed novelty song, a duet between Fulks as a mealy-mouthed drunkard and his wife Donna as the unwilling object of his affections. While there are several memorable numbers, only the atmospheric murder ballad "Coldwater, Tennessee" shows any evidence of Couples In Trouble's expanded palette.

On its own terms, Georgia Hard has much to recommend it. Opener "Where There's A Road" tears out of the gates with an infectious anthem a la "Let's Kill Saturday Night." The strutting "It's Always Raining Somewhere" wouldn't be out of place on a First National Band record; thinking about it after the fact it's easy to mistakenly hear Mike Nesmith's voice on the chorus. Fulks performed the autobiographical title song last October during a stop in Philly, and I could still sing along with the chorus seven months later, if that's any indication of how finely-crafted it is.

Fulks cites the king of the country novelty, Roger Miller, in the liner notes, citing the "gentrifying" brand of songwriting that '70s stars like Miller popularized as the inspiration for his own "country-for-grownups." The string-laden ballad "Leave It To A Loser" and the honky-tonk infidelity ode "All You Can Cheat" are examples of Fulks' gift for recrafting classic country sounds. But "growing up" can sometimes be a euphemism for "compromising ideals," and we can only hope that Fulks is not shrugging his shoulders in resignation and giving his audience what they expect. As youth gives way to middle age, so can smart-ass give way to caustic, and Robbie Fulks is far too talented a songwriter to lose to commercial expectations, even the rather diminished ones of the alt-country crowd.