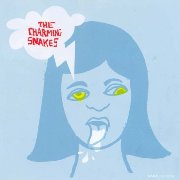 As an album, Charming Snakes' newest offering Ammunition is more of a grower than a shower, but once it gets up and running, damn but it's impressive; a rollicking, stomping, throbbing blue vein of what one might shorthand as "post punk," but to this reviewer's ears just sounds like "punk that's not boring."

Opener "Loon" perks up the listener's ears with its hypnotic drone. But it's the dirty little hip thrust that is the album's title track, all sassy hand claps and drunken playground nyah-nyahs running roughshod over guitars that sound strung with rusty razor wire, where the record truly picks up steam. And doesn't ever really lose it from there on out .

Throughout Ammunition, lead singer / guitarist Ruben Mendez's lusty, blabbermouth vocals swing wildly through the jungle gym set up by the music and when the female back-ups jump in you'll be weak in the knees. By the time "Teenage Kut Out," the album's emotional high point, hits, one can't help but realize this is one of the better sonic lays you've been party to in a while.