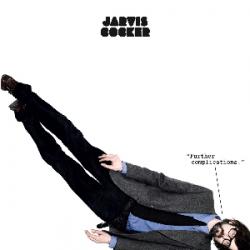 Fathers, lock up your daughters. Jarvis is back, babies, and he has come to rock your socks (and possibly your panties) off. He emerges from Steve Albini’s Electrical Audio Studio, ribald and triumphant to present his second solo-project album, Further Complications on the Rough Trade Records Label. While playing the Pitchfork Festival last year in Chicago, bassist Steve Mackey made the suggestion they work with Albini on this album, as it was incredibly cost effective (about half the price to record stateside), and they were already in Chicago. The result is one loud, sexy, rock-n-roll album. It is a far cry from the richer, more orchestral Richard Hawley-produced Jarvis, but it is a logical and interesting direction for Cocker, one that he should continue to explore.

In interviews, Cocker mentioned he wanted this album to be a more cohesive, band-driven effort, rather than doing all of the composition himself and presenting it to the band to play. The effort is apparent in the music. Most every track is gritty and guitar heavy, in classic Albini fashion, and has truly excellent percussion- there are stompers, clappers, and driving punk beats. An additional treat can be found in Steve Mackey, the bassist playing saxophone on “Homewrecker!” He played saxophone for Iggy and the Stooges as well, and brought the “street walkin cheetah” heat needed to the song. There are interesting deviations and returns to classic form as well, for those who like the softer side of Jarvis- the breathy, dreamy disco-sampled “You’re In My Eyes (Discosong)” could have very well been a track on This is Hardcore or Separations. The denser, more richly instrumented “Slush” could have well been on Jarvis. “Pilchard” is a strange, psychedelic instrumental track, punctuated only by Cocker moaning “Ohhhhhh…” at intervals.

Cocker is a chameleon to be sure, but, at his core, the same- venomous, tawdry, and incendiary. He continues to explore his time-honored themes of sex, malaise, death, and indecision on this album. It is no secret he is recently separated from his wife as of late, and it would appear as though he took a page from Sting’s mopey Synchronicity diary (Did anyone else find it EXTREMELY creepy that that was a post-divorce album?) and perhaps funneled some misplaced ennui into this album. It is a bit duplicitous- it sounds fun, crazy, and free, but underneath there is a sadness to the lyrics that would seem to indicate that the man behind the strut is licking a wound or two (see “You’re In My Eyes," "Hold Still," "Slush").

As a somewhat rabid Jarvis / Pulp / Relaxed Muscle fan, I would rather be in a multiple car pile-up or chew glass than say a word sideways against the man, but I will say his usual quick wit and skill with lyrics fall a little flat in places on the album. The music does most of the heavy lifting on each track, and at times it would appear as though he dashed something off as an afterthought and called them lyrics. This appeared to be exceptionally true of the brain-searing "Angela." It had the foundation of a truly fantastic Jarvis track- an insanely catchy hook, a few well-placed barbs, but then disintegrates into repeating the word “Angela” over and over again (it is spectacular anyways, but a bit like eating a cupcake without frosting). “Homewrecker!” suffers a similar fate. The lackluster lyrics were completely digested by the self-described “absolute racket” of the saxophone, drums, and guitar. With such a title, one would anticipate that this track would be Jarvis at his most dramatic and histrionic, but there was almost a feeling that he just shrugged his shoulders and said “Meh. That’ll do.”

This is not to say, however, that his lyrics are not complete brilliance when he’s on. On this album, he is the girl with the curl in the middle of his forehead. When it’s bad, it’s still listenable, even good. When he is good, he is knee-buckling. Some of his finer witticisms include the following:

Further Complications– “Don’t write a novel. A shopping list is better. It’s a complicated boogie, and I don’t know no better.”
Angela– “I feel the sap rising tonight. A dry stick at the end of a branch. With an overzealous hand. He can’t glue it back, no. Snapped off by Angela”
Leftovers– This track is full of some of his best puns: “I met her at the museum of paleontology. And I make no bones about it.” “He says he loves you like a sister. I guess that’s relative.”
I Never Said I Was Deep– “My morality is shabby, my behavior unacceptable. I’m not looking for a relationship, just a willing receptacle.” Bonus for the fact that he said he wanted the words “I never said I was deep” engraved on his headstone.
Fuckingsong– This is a song for an imaginary lover: “And this way, there won’t be any mess, as I assure there would be in the flesh…” Filth! Art!
Caucasian Blues– “I’ve heard it said you are hung like a white man.”

Further Complications is an album that will always be in rotation once heard. It is a beast of a completely different stripe for Cocker, and the evolution suits him well. It’s bawdy, bold, and beautiful, not unlike the man himself.