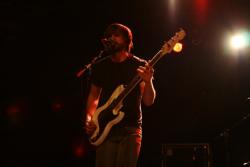 Future of the Left at the Showbox

Future of the Left was the opening band on the hyper-political punk tour featuring Ted Leo + the Pharmacists and Against Me!. Having covered Against Me! before and having seen Ted Leo a handful of times, FotL was the band I was most interested in seeing on this lineup – and they exceeded any expectations I had.

Featuring two members of the much-missed band McLusky, Future of the Left is an aggressive, noisy punk band in the best sense of the term. They call Wales home. Their debut album was Curses, and it was released about a year ago. The band also has a live record that is being released in January called Last Night I Saved Her from Vampires and is currently available at shows only (including this one, I presume, but can’t confirm because I didn’t stop by the merch table).

On Friday night, they took the stage at 9pm sharp and by that point the Showbox was probably 90% full. The show was sold out and the crowd was into it from the beginning. There was a definite energy in the room that grew from FotL’s first notes.

Live, they were as tight as you could expect from a punk band and it continued at an intense pace throughout the set with very few lulls. The guitar parts from Andy Falkous and basslines from Kelson Mathias weaved in and out of one another and filled the few openings each left for the other.

Mathias and Falkous had gotten and given quite a bit of shit to a few people in the crowd (there were a few “fuck you’s” exchanged from the crowd and band between songs but the Futures took it in stride and understood it comes with the territory. Mathias said in jest that if he wanted to watch “miserable people, he’d go back home”. They still genuinely seemed to enjoy playing in Seattle and for the most part, really enjoyed the crowd (and it felt mutual) even if this was Against Me! and Ted Leo’s crowd. That was my impression during the set (and my notes reflect it) but it was confirmed by the diary entry Falkous wrote on the band’s MySpace page. He wrote that the night was “fantastic fun” and added “I don’t love much, but ladies and gentlemen…I do love Seattle”. Mathias even went into the crowd and had them hold him up while he was playing bass from the middle of the floor.

Future of the Left, though, does not feel the same way about Des Moines. At one point between songs, Mathias listed things that they were not dedicating their songs to. On the list were “ice, snow, hazardous roads and Des Moines”. He added that “Des Moines can get a room.” Another diary entry says that they played to 30 apathetic audience members. In Seattle, their set was probably watched by close to a thousand.

The band opened their set with one of their most accessible songs, “Wrigley Scott” that has a familiar 3-chord, surf-guitar opening that reminded me of a much more advanced Offspring song (and I do mean that as a compliment). Only about 2/3 of the setlist were songs from their only album, Curses. The rest were unreleased and/or new songs, which made compiling the setlist difficult (but not impossible).

Their set was a very fast 35 minutes but it left a big challenge for Ted Leo and Against Me! to have to follow. One thing that I found surprising, was that the whole evening seemed apolitical (aside from the leftist song lyrics of all three bands). There were no people from the DNC trying to raise money, no overt speeches between songs or sets and I saw far more t-shirts of The Misfits and Dropkick Murphys than I did for a certain junior Senator from Illinois.

In the end, though, it was a kick-ass set from a great punk rock band. I can’t wait to see Future of the Left play a Seattle show for their own crowd (which will look quite a bit like the same people that were here for this show).