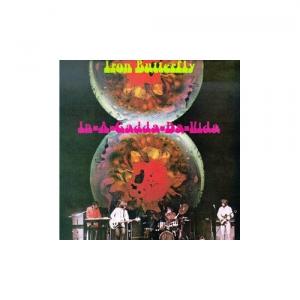 I suppose if you were to rank songs in the rock era based on "reputation" rather than "favorite" or "best," you would very likely see "In a Gadda Da Vida" somewhere near the top. The song is legend, mostly for its ridiculous 17 minute run time, its equally ridiculous drum solo and substantially more ridiculous title. It is a legend unto itself beyond the musical merit of the song.

One of the highpoints of country club liberal arts education in college was being able to "The History of Rock and Roll" and actually getting credit to sit in the basement cubicle of the library with a cassette I checked out from the reverse desk so I could put on my giant nerd-phone and listen to every single nuance of "In a Gadda Da Vida". At the time, I could say I'd heard bits of the song here and there, knew of its place in musical trivia and generally appreciated it from a far. However, it sit and concentrate on listening to every note of the epic was, well, mind-numbing (in a good way). And that drum solo. Honestly, words don't do it justice – it makes me long for more drum solos, but I think thats a fool's dream. It just tumbles along all by itself like the drummer has forcibly taken over the band in some sort of rock and roll coup and he's saying "dammit, I get my fucking due, OK?" The rest of the instruments slowly edge there way back in, starting with the organ waxing almost classical and the guitar screeching like a wounded animal until the band finally takes back the song from whatever demons have possessed it (but not before the drums and bass try one more attempt at toppling the regime).

I'm not saying that Iron Butterfly somehow made me a better music listener, but, wait, no actually, that is exactly what I'm saying. Trying to peel back the layer after layer, listening to how every instrument took its turn strutting their stuff and well, just feeling the moment (well, many moments) hiding here were, to a college student, revelatory. Of course, being 17 minutes long, I wasn't apt to listen to the song a lot since then, and honestly, it is not the sort of song you listen to casually (well, under most sober circumstances). Listening to it today, I noticed something else though and it kind of creeped me out. If you spend up the tempo, you wouldn't too far off from the Stone Roses' "Fools Gold". Maybe I just haven't had enough coffee yet, but there is something distrurbing similiar between the two songs – not that the Stone Roses were copping the song from Iron Butterfly, but if there ever is a case for musical progeny, it is here.

So, for any of you TIG readers who have so far avoided listening to the real, 17 minute version of this, do so. Possibly now. Find an isolated corner in your office or home or school, get the best headphone you can find and really just feel it. I don't truly understand why I feel you need to do this so urgently, but I think we'll all feel better when you do.