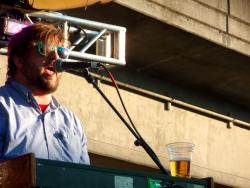 It’s nice to see how Georgetown Music Festival, probably one of my favorite fests, has grown since last year. GMF 2007 took place in boiling heat, if I recall it was upwards of 95°, and poor Idiot Pilot was sweating buckets on their very exposed stage. Last weekend it never hit 80°, but the stages were well equipped with cloth tents, keeping performers comfortably shaded the whole time. Maybe that isn’t the best indication of a growing popularity of the festival, but there were noticeably more people in attendance this year than last.

Maybe that was because of the stellar lineup this year. Seattle stars Tennis Pro, the Lashes, and my personal favorite Aqueduct all certainly can draw a crowd. I don’t know if I’ve properly gushed about Aqueduct here on Three Imaginary Girls yet. Have I mentioned Aqueduct is solidly one of my favorite bands, always? If you were to ask why, I’d quote a nice drummer from LA band the Hanks who I talked to for a bit at the festival: “It’s a nice guy and great music, I mean that never happens. It’s usually like…" (and here he did a little uneven scales thing with his hands).

Aqueduct shows never disappoint me, even though it always seems impossible that the next could be better than the last. They don’t play nearly enough shows, but that may be a clever ploy to make their few performances absolutely irresistible. I once again found myself at the very front, rocking with Rachel to the familiarly catchy tunes. Frontman David Terry always seems so enthusiastic and excited to be sharing his music with the crowds, starting with his usual opener “Who Wanna Rock?” The good times continued as he launched into a set that was dotted with golden oldies (“Social Scenic” from his very first EP Power Ballads), and a song so fresh that they were hesitant to play it for us (Yes, Aqueduct is recording again!). Each song was danceable, poppy greatness, and the band members themselves are so adorable it was impossible not to fall in love. For instance, sometimes-guitarist this-time-drummer Matt Nadar and I would make eye contact every so often, and each time we did we’d rock out extra hard together, him with a huge grin on his face.

I can’t wait to see how Georgetown improves next year. The neighborhood is really perfect for such a bite-sized festival, in all its rustic charm. Brick buildings with artist lofts, cute local businesses with pleasant management, a huge grassy park a few blocks from the festivities. I can only hope the festival keeps its laidback feel and pleasantly sparse crowds, because it’s really one of the most manageable music festivals out there.

By the way, I highly recommend Two Tartes Café, a cute little bistro my friend and I found for dinner. Not only is the food delicious and cheap, but the ladies working there are very kind and funny.