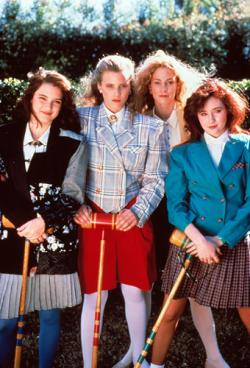 Get your red scrunchie out for Heathers at SIFF! {3/23}

I recently picked up the blu-Ray of Heathers, a film I quoted enough during my Senior year to end up in the Principal's office several times for a hand-slap re: using foul language and being disrespectful to teachers (the hallmark of my teenage career). Anyway. My point is, I was reminded after re-watching it for the 50th time that this movie is INCREDIBLY clever while at the same time extremely dark. AWESOME.

Veronica (Winona Ryder, who wears a freakin' monocle while writing in her diary!) is the fourth in a group of notoriously bitchy Heather-named friends ("It's like they're people I work with, and our job is being popular and shit."). She kind of hates them, but you know, that's the price you pay for ruling the school: terrible friends. A new student, mysterious and dark trenchcoated rebel J.D. (Christian Slater at his smirky, adorable best) peaks her romantic interest, and the two start making out, and then jokingly making plans to murder the popular kids – but uh, J.D.'s not really joking, and it's not long before Veronica joins him in systematically assassinating Westerberg High's all-stars (Yes, that HS is named after Paul W.).

Basically, it's like the best mash-up film ever: murder, comedy, romance, and teen angst — with raunchy jokes and lots of swearing. You should go see it on Friday, March 23 at SIFF Cinema at the Film Center, so you'll know what I'm talking about when I say things like, "Well f*ck me gently with a chainsaw!", "Our love is god. Let's go get a slushie.", "Regular of BQ?" and "Did you have a brain tumor for breakfast?"