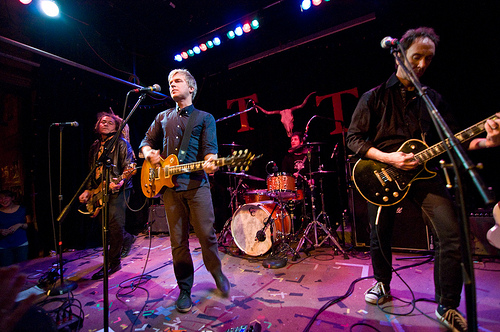 Remember that time when Nada Surf brought serious amounts of rock to the stage and melted our faces off with Say Hi at the Tractor? Oh, right — that was just last month. Well, if you're anything like us, the strains from that show have been stuck in your frontal lobe ever since, running side-by-side with the still-in-heavy-rotation the stars are indifferent to astronomy. And whether you saw or missed the show, whether you're listening to the new album  and putting "When I Was Young" on a mix for the first or thirty-fifth time, you (and we, and the rest of Seattle) are in luck: Nada Surf is coming back to town this weekend, after a string of successful shows, South by Southwest performances, and all-around positive response to their latest studio effort.

Tickets are available through STG now for the upcoming show at the Neptune this Saturday, and we strongly recommend picking up a pair (or two) in advance before the show sells out. But if you want to roll the dice on getting in with a +1 for free, you can enter to win a spot on the guest list from us! Just drop an email our way, to tig {at} three imaginary girls {dot} com with the subject line "PicturesInOurPretendWallets" anytime between now and the end of the internet day, say 5pm-ish, on Thursday. We'll draw a winner Thursday night and notify you by email that you're on the list for Saturday's show. Easy peasy!