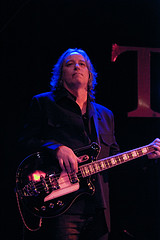 Getting my face rocked off with KMRIA and The Minus 5

How in the cracker was I the only person I knew at the Tractor on Friday?

Granted, I know there were a ton of good shows going on last weekend. As per usual. Bands everywhere, bands that fellow imaginary staffers were excited about, crazy good bands playing for free — it seems like we all branched out to our respective corners and geeked our faces off. And we'd all probably tell you that the show we saw was the best, and that you were sorry you missed it, and how we can't believe we got to experience such radness, and how we wished you were there to share it with us.

Such are the perils of life in Seattle.

However, I will throw down to the mat as having been at the best show on Friday's docket, for several reasons. First, it was at the Tractor. I love the Tractor. It's got a super-comfortable atmosphere, is generally a jerk-free zone, and I never have to compromise my personal space. It usually seems as though everyone there is genuinely interested in the actual show. Second, I got to sit and leisurely read the paper before the set. Third, I made some new friends with a few aforementioned show-enthusiasts as the main space started to fill up, and we geeked about bands and about living in the Greatest City On Earth.

And then the show started. Cue reasons four through eight thousand: for the next few hours I stood three feet away from Peter Buck, Jenny Conlee and Chris Funk, Scott McCaughey, and John Ramberg. Along with a gaggle of other notables. For two killer sets from the Minus 5 and KMRIA. On Pogues cover night. Getting my face rocked right the f___ off.

But I'm sure your show was equally awesome. So you win too. And a quick PS before the photos, on reasons eight-thousand-and-one through infinity of why my night was rad: I spent an hour post-show freaking out in Bop Street. Holy crap. That record store has got to be the sweetest place I've been in quite some time, and thanks to Alex, I've got the pictures to prove it. The next time you find yourself in Ballard, be sure stop by and spend a paycheck. Or two.

{Check out the rest of the show, and your weekend in photos, at the deep end of the imaginary flickr pool!}