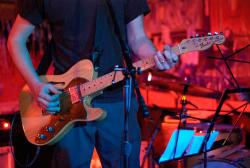 Getting my sad bastard on with Pablo Trucker

So, I've written these guys up a handful of times already, first with the fateful stumbling across of Pablo Trucker's percussionist-slash-barista at Victrola, making my macchiato and geeking out about music; and then after a set that gave me enough ache to last for the next two lifetimes. At the time of this writing, I've managed to inadvertently have moved into said drummer (and his girlfriend)'s apartment building, and have also seen yet another performance that affirmed what I wrote in my notebook randomly last month:

I believe in Pablo Trucker.

And for what it's worth, so should you.

Watching these guys play is akin to watching super-advanced jazz musicians doing shit that you can't even wrap your head around, except to know it's brilliant, only in a traditional-ish full frontal rock band format. Right. Andrew Rudd (percussion, vocals, espresso) and Brian Wagner (guitar, vocals) play not only this hands-down brand of deconstructed Americana, but they play it with each other and off of each other like old men in a jazz club might do it. It's legit. They coax and wrangle and choke and plead these sounds out of their instruments, and they do it with this seamless, amazing harmony of intensity and language that I've never seen rock musicians do before. It's almost like they're having a conversation with each other via their instruments, even though that sounds pretty hokey. And on top of that, they back it up with gorgeous vocals and sweet, sweet lyrics — all amidst full throttle percussion and full volume big-bodied electric guitar assault.

This past Thursday, Pablo Trucker got their sad bastard on in a big way, and even added in a (permanent?) bass player to kick things up a notch. They also released their first album, which is a combo of two EPs called Heads Tails (sweet graphic here that you might have to logged into your Facebook to see) that they've put together to form a full length. An album that's awesome, that I have coming via a note slid under my apartment door, that I will inadvertently geek out about and not write up. But you – yes, you! – can check out their Facebook and MySpace pages to find out more about it,, and give some tracks a listen for yourself. I will say, recorded talent aside, that the full translation happens live, and you'll be doing your body good to catch an in-person set the next time you're able.

And lastly, from the pitch-blackness of the Sunset, here's something kind of like a photoessay.
Conservative Dad took the stage for the set beforehand with an album release of their own, and were quite photogenic, in addition to providing good opening support. Typically, the guys in Pablo Trucker will have set up kind-of sort-of in a few direct stagelights, but Thursday was not one of those nights. Regardless, you can see the whole set of photos here, and it's always fun to drop by the imaginary flickr pool for more (which topped 5,000 images this week, by the way!).