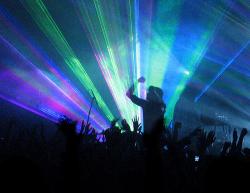 Ghostland Observatory: Made for dancing, not much else

"I need a really good record for, say, a dance party."

My friend and I were at Easy Street, trying to use up the gift certificates I had received for Christmas. Eagerly, he shoved a copy of Ghostland Observatory's EP Twin Cities. All he said was: "This is awesome."
Admittedly, I still have yet to break open the album, as I sadly discovered my turntable speakers were no longer functional. But between now and that day, I've heard mixed things about Ghostland Observatory. Erik Gonzalez gave their latest release Robotique Majestique a biting 2.8 review recently, yet the person I intern for at KEXP gave an unhesitant and breathless, "I LOVE them" before their full name escaped me.
I decided to check this Austin band out headfirst, by attending their sold-out show here last Friday at the Showbox. (Saturday's performance, too, was at capacity.) Of the raving, the most common note was they are a great live band.

Arriving almost precisely at the moment they started, I was quickly reminded why a short person should not be late to a sold-out venue. I wedged myself in like the wallflower I planned to be in a side corner of the bar, which turned out to be next to a group of girls whose plan was to drink and dance. I quickly realized that should have been my agenda as well. Going in alone and 100% sober is undoubtedly the worst mistake to make if you are to see Ghostland Observatory.

Their synth-beats were infectious, and I instantly knew why my friend so quickly recommended them for a dance party mix. There isn't too much memorable to their music, mostly played by one half, Thomas Turner. The music is just plain ol' fun, which seemed to be what everyone down in the dance floor was having. It was the singer's voice I could not stand. His vocals are about as enjoyable as Johnny Whitney's to listen to. And for how much was going on with the keyboards, combined with all the hype of their showmanship, I was expecting a bit more bravado from the braid-wearing, cut-off shirt bedecked singer/yeller, Aaron Behrens.

Unless it is their light show which blows everyone away. They made full use of the concave ceiling, a full choreographed laser shower sloshing back and forth around the bowl. The strobes were at one point so strong, they made me uncomfortable. I wished I were stoned.

I also wished I had brought a group of friends along with me. Because Ghostland Observatory's show and music are not suited to merely listen. The purpose is to have fun, dance your ass off, and forget the vocals amid the fog and lasers. Feeling awkward and alone, I left the show to those who came well prepared for the dance party. 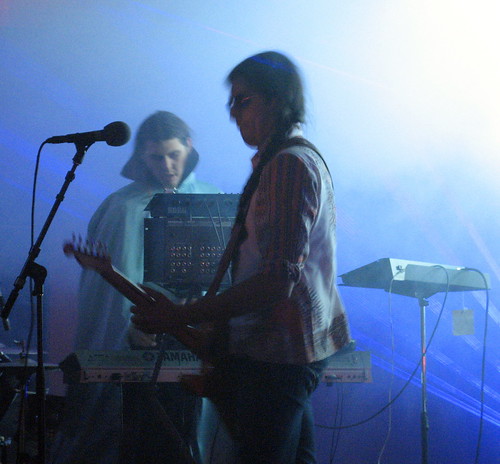