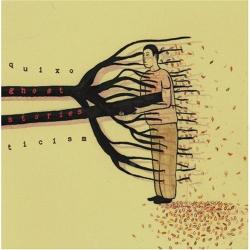 Quixoticism might not be the most exotically new-sounding album you’ve ever heard, but it's quite a satisfying treat from a Seattle jack-of-all-bands. Ron Lewis, beyond Ghost Stories, finds himself in the Joggers (sometimes), Grand Archives, and the Fruit Bats, along with being a purveyor of cheesy comestibles.

Ghost Stories is more or less a one man show and what you get is a highly adorable pop record in the vein of XTC, late 60’s Beatles, or Michael Penn, chock full of catchy melodies and fun lyrics from start to finish. Everything seems very pleasant on Quixoticism, with a musical sincerity that is seriously lacking in a lot of modern rock these days without turning into monstrous twee (not that there is anything particular wrong with twee, but sometimes change is good). It's sort of hard to get across the pleasant feeling I get when I listen to Ghost Stories – the best I can do is that it feels like the sonic equivalent of watching snow fall from inside a nice, warm house in the middle of winter. Something like that, like kittens dancing in unison in slow motion. Pleasant enough for you?

“The Upper Ten/The Lower Five” starts off with Clap Your Hands Say Yeah-like feel that then slowly morphs into a disturbingly accurate Andy Partridge impression that then arrives at a very fine Beatles song, and, in a nutshell, that is what to expect from Ghost Stories. “You Were It Like a Stained Glass Window,” beyond its fabulous title, is an infectious two minute pop song that deserved airplay more than most summertime hits. Ghost Stories shows off its quieter side on the Elliot Smith-meets-Belle & Sebastian number “Secret Life of the Union, Part II,” a song broken in half by pleasurable chimes and bird sounds – a modern rock lullaby. This less-desolate Elliot Smith sound is returned to on “The Pink Princess Eskimonia,” a cute little ballad. “Secret Life of the Union, Part I” (which comes after Part II if you’re keeping score at home) is livelier, more like an Arcade Fire song, but with a little more Beatles-like pop sensibility that breaks into as anthemic of a song you might expect from a one-man band. You get a more Decemberists flavor on “The Black Hand,” which is driven by a Baltic rhythm and an oddly Cash-like guitar that grooves into a full-blown bleak-pop gem.

If anything, you just have to appreciate Lewis’ dedication to creating infectious melodies, because once you get to “Isn’t It Appropriate That Way,” the aggressive XTC sound has blossomed and you wonder if you’ll ever be able to get this album out of your head. The album closes with an absolute marvel of self-loathing song naming – “Even a Vampire Wouldn’t Drink My Blood” – and the song comes through like a perfect prize to end the disc. It starts with a marching beat that breaks down into a stripped down verse that rebuilds the song piece by piece until you’re sucked in like a black hole of pop-rock flawlessness waiting for the instruments to drop out and Lewis half-sing, half-whisper the song title.

Ghost Stories have clearly put their best foot forward with Quixoticism by creating an album that knows what it wants to do, does it and doesn’t care that it isn’t shocking the audience into submission through unwarranted noise and experiments. This album caught me by surprise, and now it can catch you by surprise because if you’re looking for a great early summer soundtrack, this is exactly the sort of album you need.