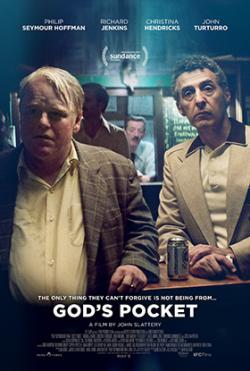 Oof. I didn’t expect watching one of the last films Phillip Seymour Hoffman was in would be so … awkward, but it was. And for more than just the obvious reasons.

God’s Pocket is the first feature from Actor and Director John Slattery (aka Roger Sterling on Mad Men), and while the movie features some strong performances, the execution is definitely flawed. The story, set in a working class neighborhood in Philly in the 1980s, is based on a novel by Peter Dexter.

Main character Mickey Scarpato is something of a small-time crook; selling meat from the back of his truck that he gets from sketchy sources, stealing other trucks, and predictably, losing all his earnings at the horse track. His wife, Jeanie (played by Slattery’s MM co-star, Christina Hendricks) is gorgeous, and predictably, dissatisfied. She also has a 22-year-old-going-on-13 son named Leon, who, predictably, the entire neighborhood hates because he’s a racist, drug-addicted jerk.

It doesn't take long for Leon to get himself into trouble and get killed, leaving Mickey stuck with a huge funeral bill he can’t pay, and leaving his wife a wreck. Mickey is completely useless at comforting his wife, and doesn’t seem that disturbed by his stepson’s demise—except when it involves physically dragging his corpse around (a bit that’s played as dark comedy but comes across as just plain wrong).

While Mickey’s running around trying to get together some scratch to pay for everything with the help of fellow crook “Bird” (John Turturro), Jeanie is talking the cops and local celebrity/journalist Richard Shellburn (Richard Jenkins) about how she doesn’t believe for a second that her son’s death was an accident. There’s also some kind of subplot with Bird and his flower shop/front and his … mom? Grandma? Friend? I’m unclear about that.

Maybe if I’d actually read the book, I’d be able to inject the screenplay with enough back story to fill in the blanks, but I haven’t. And what's on screen is something that's trying to be a dark comedy that doesn't know how to handle that "dark" party, so instead it just ends up being sad … and a little disappointing. Particularly in the case of Jeanie: a character who could have had a lot of depth, but ends up reduced to being half grieving mother/half object of desire with little room to voice her own thoughts and feelings.

There are hints here and there that God’s Pocket had the potential to be so much more, and it’s hard to tell where to place the blame for it not being anything other than an average, surface-y, indie film. Hoffman fans that are hungry for any of his remaining performances should check it out, but I can’t really recommend it to anyone else.