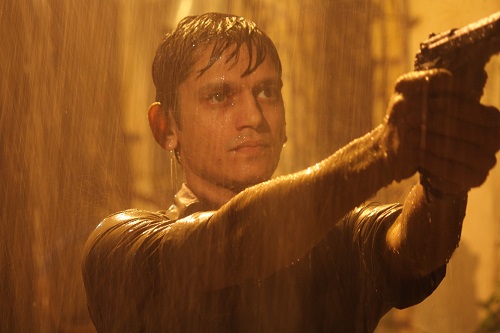 “The law is what it is. If you can’t use it to get justice then you’re the ass!” – Rookie officer Adi addressing his superior.

Monsoon Shootout from director Amit Kumar is a tight and satisfying take on first day on the job dramas such as Training Day, while layering in a metaphysical treatment of the power of choices we make each moment of our lives. Clocking in at a fast 88 minutes, a lot gets packed into this one.

The film kick offs with Adi’s first day on the job as a cop. He’s teamed with Khan, a beyond pragmatic lawman who believes in justice but not upholding all the details of the law. That’s made pretty clear when within minutes of reporting for duty Khan executes a group of suspects in the extortion murder of a real estate developer. Adi’s asked to crash their car to cover up the “escape” attempt, and his moral dilemmas begin. Before long he’s making choices that are all over the shades of grey spectrum as they try to put away Shiva (aka the “Ax killer”), who’s just the tip of the bloody spear wielded by local gangster “the Slum Lord.” In the meantime, corruption is all around in what could just as easily serve as a scathing indictment of Indian society as it could a hard-nosed police thriller.

Adi turns out to be a hell of investigator and coupled with Khan’s sack of guns makes rapid progress on the streets. He’s quickly on the heels of Shiva, racing through a crowded night market. Drenching rain provides the backdrop for a fateful split-second judgement around with the rest of his existence pivots. I will say no more about that.

The look of Monsoon Shootout leans toward the dark, lush, and predictably rain-soaked — which blends nicely with the relationship of the few, but often explosive, words between Khan and Adi. Things start off pretty fragile, but the deepening relationship adds authenticity to the story. Truthfully, the actual nature of the crimes are bluntly simple enough that they’re almost besides the point. But they form an important construct to hang off everything else. Plus,the Shiva is one seriously serious bad-ass dude. Especially for a guy with such a sweet clay-sculpting kid.

If you threw The Wire, Training Day, Sliding Doors, a class on ethics, and a drenching rainstorm into a blender you’d get Monsoon Shootout. And if you could, I’d advise you to take a long, deep gulp of a cocktail before you start the film. That 88 minutes will scream by, punctuated only by a couple of excellent WTF? moments. Drink up!

{Monsoon Shootout screens at SIFF on 5/16 at AMC Pacific Place, 5/17 at SIFF Cinema Uptown, and again 5/19 at Lincoln Square Cinemas}