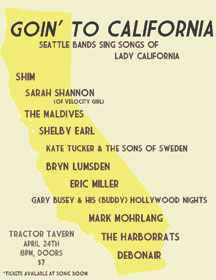 Tonight at the Tractor Tavern in Ballard there's a special benefit show going on. It's called "Goin' To California" and it features a whole bunch of Seattle bands singing songs about California. The whole thing is an Earth Day benefit and proceeds go to Sustainable Ballard.

Tickets costs $7 and doors are at 8pm.

I've been trying to think of as many California songs as I can, trying to guess what will be played. So far I've got:

That won't complete the night. What other songs am I forgetting??