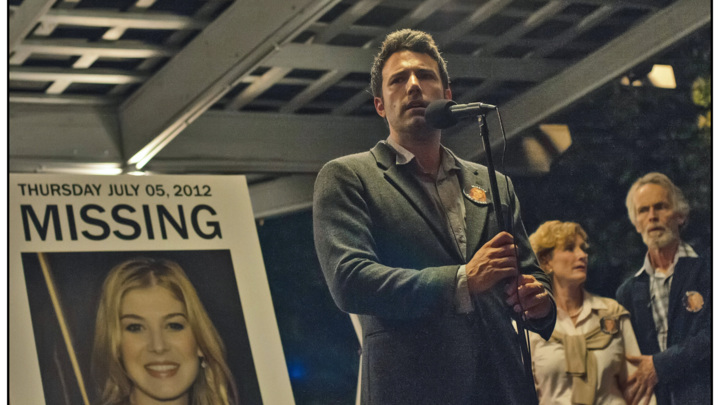 Firstly: I am one of “those people” who ripped through Gillian Flynn’s Gone Girlnovel in record time, gasping the entire way and freaking out over every last sordid, surprising detail—so when they announced the Gone Girl movie adaptation was underway and that David Fincher was directing it, I WAS THRILLED. Hell, even when they announced my least favorite actor in the entire world was playing the male lead, I was still pretty thrilled. If anyone can play an unlikeable husband, it’s surely Ben Affleck.

Secondly: I don’t want to ruin anything with those damned spoilers, BUT. I am also one of “those people” who got kind of upset when it was leaked that they had changed the ending, with Flynn reportedly rewriting the whole third act for the screenplay, because I feel like it’s pretty essential to the story. What I will say is: fear not, faithful lovers of the novel, because the film does actually follow the book pretty closely.

Thirdly: Every single character was casted with PERFECTION. Rosamund Pike absolutely nails Amy Dunne, Carrie Coon is exactly how I imagined ‘Go, David Clennon & Lisa Banes are more-than-believable as Amy’s parents, and Kim Dickens (in my opinion, one of the most underrated actresses in the world) is right on as the skeptical Detective Rhonda Boney. Of course, I can’t help but thank that Affleck’s delivery could’ve been stronger (three words: close. your. mouth.), but he was still pretty well cast as Nick Dunne.

Fourthly: In case you haven’t read the book the gist is as follows: Nick Dunne arrives home one morning to find his house in disarray and his wife missing. As the days and investigation drag on, the image of their seemingly happy marriage gets deconstructed by media, friends, and neighbors—and all signs point to Nick having murdered his beautiful, perfect wife.

I was ALL IN two-thirds of the way through; remembering parts of the book that I loved as the film unspooled, wondering why they changed a few little details, sure, but for the most part: I was DEEP into the story, again. Even though I knew what would happen. And then that last third hit and as I prepared myself for change and then realized it was exactly as written—I got pulled out of it. I started thinking it was kind of ridiculous. Everything seemed laughable and over-the-top, and not in a good way. In a “THEY RUINED THE STORY” way.

Which honestly doesn’t make any sense, right? You’ve got Fincher, the master of thrilling atmosphere, behind the camera. You’ve got a solid cast. You’ve got a strong story that doesn’t veer away from the basic plot of the book, hardly at all.

I can only conclude that this is just one of those books that is better left on the page, and just can’t be translated to the screen effectively. That, or I should have watched it through a comedic lens (like my friend Matt did), embraced the over-the-topness, and laughed my way through it. Maybe I’ll have to try that …