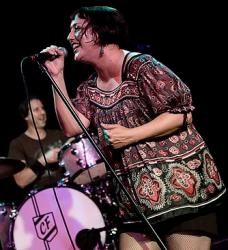 The last time I saw Seattle band Goodness, Clinton was still in the White House, I was single and childless, and the band completely knocked me out with their well-crafted, highly rocking set. A lot has changed since then, but damn if the band didn't send me for an emotional trip down memory lane while packing a wallop as fresh and vibrant as it ever was back in the late 90s when last we rocked together.

For a little background: Goodness formed in the mid-90s and featured powerful Hammerbox front woman Carrie Akre on vocals. They rose to Seattle adoration and played about for several years, including Bumbershoot and selling out the Showbox, before disbanding in 1999. I've never understood why they didn't get Really Huge; my working theory is they came between two Seattle bandwagons, too late for grunge, too early for the post-grunge Seattle music resurgence of the mid-aughts.

But no matter: those of us who were here for Goodness *loved* Goodness. They were one of the two bands I relentlessly stalked when I first moved to Seattle (the other being the Amateur Lovers, who also reunited for a show not long ago). 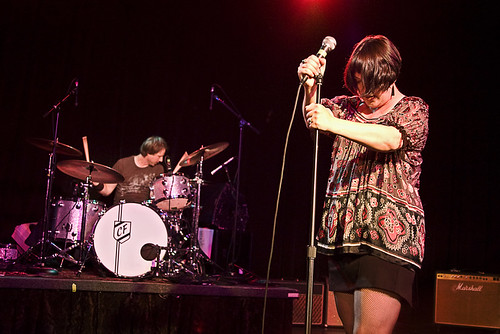 I wasn’t the only one. The Showbox was rocking, jumping, packed and pumped with fans who have sorely missed Goodness over the past near decade. One superfan in particular drunkenly introduced himself to my fellow-Goodness-fan-pal Jenny and me as “John” before the show. After fawning for several moments (“You two are so beautiful,” he slurred), he waxed nostalgic about seeing Goodness at Rock Candy back in the day and let all those within earshot know that he planned to "mosh and slam" throughout the set. Lucky us. And did dude ever make good on that unfortunate promise. He failed and wacked and fell into us and all the unfortunate souls within stumbing distance.

A few songs in it became clear that my well-placed pointy elbows weren’t going to deter him; the high of Goodness and perhaps one-too-many Captain Morgan and Cokes evidently left him impervious to pain and the wilting stares of those around him. Jenny and I wriggled our way to the center throng and spent the remainder of the set smack in front of the incredible Ms. Akre.

John-the-flailer might have been annoying, but the end justified his wild man means: standing in front of Carrie Akre in her full-on rocker glory was astonishing, amazingly, incredibly glorious. Gush gush gush.

Then Garth swooped in — or should I say, out — and did one of the coolest things I've ever witnessed a guitar player do (and I've seen _a_LOT of guitar player antics). Garth jumped offstage and right onto “John,” tackling him and ejecting him from the front of the audience before rejoining the band onstage. It was So. Bad. Ass. Rumor has it a bottle was thrown onstage, but if so I missed that part. Yay to Garth for making sure all the fans in front could enjoy the set! No sense letting one out-of-control annoying superfan ruin it for the rest of us.

Luckily the rest of the superfandom was of a kinder, gentler ilk. At the beginning of the show Akre proclaimed, “We have always had the greatest fans,” and ya know, I’m inclined to agree. The whole night had the vibe of a celebration more than just a show. Everyone was screaming and cheering and singing along, completely un-ironically relishing the band. 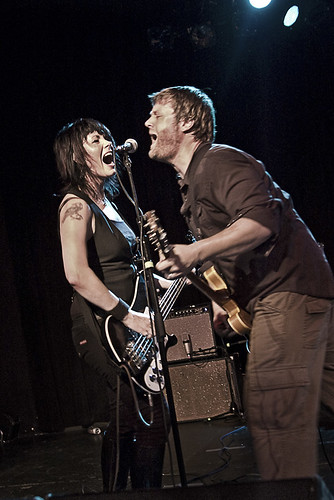 Goodness responded in kind. They just know the art of a performance, starting with good songs and working up to great ones, taunting the crowd to jump and sweat. As my friend Jenny commented after the show, “It’s been years since I’ve been to a ROCK show like that.” It was a joyous and unabashed performance, and the bouncing of the spring-loaded floor of the Showbox as we all jumped along with the amazing music made my spirit feel buoyant.

It was strange, hearing Carrie’s superwise lyrics, which provided much of the soundtrack to my single adulthood, now that I'm married and a mama. I found myself wondering if Carrie found it hard to sing them, now that she’s the same. Then she dedicated “Boy Glory” to all of her and Fiia’s exes. “Oh yes, I went there,” she laughed, thanking God for their current husband and boyfriend. It was so sassy, and I think she sang those lyrics like she meant them even more than ever from the other side of them. And I felt the same way, making the night seem even a little more psychic and surreal.

Favorites "Superwise," "Eveready," and “Labor Day” were total crowd pleasers, and the rousing finale of "Wicked Eye," which had Fiia and Friel killing the rhythm section, mounted the band into a frenzy of a finale before leaving the stage, ending the show with an exclamation point instead of a period. There was no ambiguity of a second encore; clearly, they had concluded with a Huge Big Bang.

Luckily it wasn't the final finale. Goodness announced they have a couple more shows forthcoming: August 23rd at the Mural Amphitheatre, and November 22nd at the Tractor. Does this mean the band's reunion might be semi-permanent? I have no idea, but I'm hopeful. 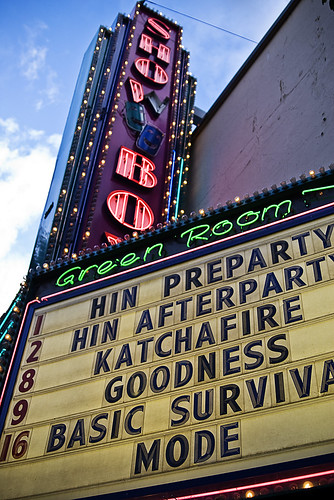