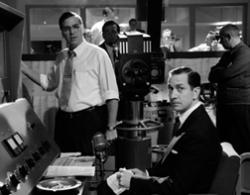 "We must not confuse dissent with disloyalty."

The year is 1953, and the Columbia Broadcasting System is just beginning to realize the full potential of a new medium known as television. Now-legendary journalist Edward R. Murrow (anchor of the popular news program See It Now and talk show Person to Person) makes the controversial decision to report disturbing facts about Wisconsin Senator Joseph McCarthy, witch-hunts by his Permanent Subcommittee on Investigations, and the resulting "Red Scare" (back when that color still meant Commie), leading to a big-time feud between the two powerful men. The truth is told, and the viewing citizenship is enlightened and encouraged amid sponsor pull-outs, impending cancellation of the series, and the constant click of AP wires in the bustling CBS newsroom.

George Clooney's second directorial effort, Good Night, and Good Luck., is a thrilling and beautifully-executed chronicle of the pre-infotainment "golden age" of television news, when networks refused to be swayed by government and corporate interests and reporting was actually about the truth. Robert Elswit's lustrous black-and-white photography mixes beautifully with vintage 16mm and kinescope footage (in which blustery McCarthy himself is often seen) to create a lean and compelling account of that halcyon era.

The performances here are marvelous. David Strathairn (who you might remember from numerous John Sayles films, or Dolores Claiborne, or even The Days and Nights of Molly Dodd) is a revelation as Murrow, with his lean physique, dark features, and subtly ferocious self-certainty. Clooney (perfect in a '50s character role) plays his ever-supportive producer Fred Friendly, with Jeff Daniels and Frank Langella as their network bosses. Ray Wise (Twin Peaks' Leland Palmer himself, again sporting a grief-tinged larger-than-natural smile) is the troubled evening news anchor, and, in a cool little subplot demonstrative of belief systems of that time, Robert Downey Jr. and sublimely timeless Patricia Clarkson play CBS employees forced to hide from their coworkers a scandalous truth: they happen to be a married couple.

Yes, Good Night, and Good Luck. is a cigarette smoke-wafted B&W movie about fifty years ago, but I hope it goes without saying that the film is a disturbing mirror of our own time. It wasn't too long ago that Andrew Sullivan was labeling writers who raised questions about the evidence for an Iraq invasion "fifth columnists" for the enemy. Or that Bill O'Reilly declared such critics "enemies of the state." Or that Ann Coulter asserted that most Democrats are guilty of "treason". 2005's climate is also one of fear and reprisal, punctuated by an elected official with hysterical disregard for detractors. What a pity that our national broadcasters so blatantly lack the monumental, heroic tenacity of Edward R. Murrow, whose signature parting line still says it all.

"We will not walk in fear, one of another. We will not be driven by fear into an age of unreason, if we dig deep in our history and our doctrine, and remember that we are not descended from fearful men. Not from men who feared to write, to speak, to associate, and to defend causes that were for the moment unpopular…. We proclaim ourselves, as indeed we are, the defenders of freedom, wherever it continues to exist in the world; but we cannot defend freedom abroad by deserting it at home. The actions of the junior Senator from Wisconsin have caused alarm and dismay amongst our allies abroad, and given considerable comfort to our enemies. And whose fault is that? Not really his. He didn't create this situation of fear; he merely exploited it — and rather successfully. Cassius was right: 'The fault, dear Brutus, is not in our stars, but in ourselves.' Good night, and good luck."